For the first time ever, Chinese outbound property investment surpassed the $100 billion mark. 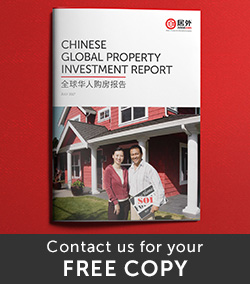 2016 saw Chinese real estate investors spending a record $101.4 billion on both residential and commercial properties globally – up 845% over the past five years, and a 25.4% growth from 2015.

According to our recently released Chinese Global Property Investment Report, the US is considered by most property investors from China as a ‘near perfect’ market, which explains the more than $50 billion lavished by Chinese buyers on American real estate.

Australia comes in at second, followed by Hong Kong, Canada, and the UK, which rounds up the top 5 most popular investment destinations for Chinese property hunters (by dollar value) last year.

2017 may potentially see Chinese property investment undergo a slight shift in momentum, due to a slew of foreign buyer taxes imposed in certain countries, restrictions by the Chinese authorities on the transfer of capital overseas, and the possibilities of a slower Chinese economy.

Nevertheless, 2017 is slated to rank as one of the top three years ever recorded for Chinese outbound property investment, according to Juwai COO Sue Jong.

"Current trends suggest that Chinese property investment this year will be on par with the levels of 2015, or about $80 billion. That would make 2017 one of the top two or three years in history. So, while levels are lower than in 2016, they will still be extremely high by any standard," said Jong.

What’s worth noting, though, is that while China has made headlines worldwide for their fervent and massive overseas property investment in the past few years, Chinese property investment abroad is, in fact, still underinvested globally in comparison with other economies.

China merely ranks 18th in the world by aggregate ownership of foreign real estate and other assets compared to GDP, at just 12% – well below the OECD average of 42% and even lower than Slovenia.

“We believe we estimate conservatively when we forecast that Chinese investors will acquire more than $1.5 trillion of overseas assets in the coming decade or so as they close the underinvestment gap. Up to half this new investment could go to property,” added Jong.

Keen to know which investment hotspot is predicted to be the strongest performer in 2017? Get your free copy of the report now to find out.