At the back of a rather interesting year in 2017, the Singapore property market is again attracting headlines now.

This time however, it is due to the influx of Chinese money into the market – and it is a lot of money.

In 2017, investors and developers from China were already extremely aggressive in their spending, ranging from private home purchases to even bids for land parcels in Singapore. The number of transactions increased significantly from 2016. Notwithstanding that, the transaction prices recorded were also at exorbitant levels, especially with respect to land developments.

Starting off with private home purchases, it is imperative to note that collectively in 2017, there was a huge 32% increase in total private residential units purchased by  Mainland Chinese home buyers, totalling 1,564 units as compared to 1,186 units back in 2016. However, out of this number, about 1,074 units were purchased by Singapore Permanent Residents (SPRs).

Nevertheless, the number of non-PRs from Mainland China who make up the rest of the home buyers have also increased by 30.3% from the preceding year in 2016.

It is also interesting to note that on a more micro scale, these Chinese buyers were especially active in Districts 3 (Alexandra Road, Tiong Bahru, Queenstown), 15 (Katong, Marine Parade, Siglap, Tanjong Rhu) and 19 (Hougang, Punggol, Sengkang) – areas which are away from the prime central districts of Singapore.

Prices have bottomed out in Singapore

This increase in home buyers can be attributed to a myriad of factors. One reason can be due to the stage of private residential prices in Singapore in the property cycle.

Last year, prices had bottomed out, prompting investors to undertake a counter-cyclical approach, thus resulting in a rapid recovery towards the end of the year as demand saw an unprecedented level of increase.

In spite of everything, the prices at this stage can be said to be lower and hence cheaper than other established popular investment hotspots, such as Hong Kong and other Chinese cities like Shanghai or Beijing.

Furthermore, the growth potential for price appreciation presented Singapore private residential properties as an excellent investment proposition, with anticipations that the recovery rate will push the prices and the property cycle to the peak within the short- to mid-term horizon.

As such, this opportunity will likely result in the high possibility of Chinese investors into the market for the foreseeable near future.

On the land sales front, China developers were immensely competitive in their operations in Singapore, increasing the number of bids as well as setting record prices for their successful winning purchases.

Mainland Chinese developers were dominant in 2017 as they invaded the Singapore land sales market. Out of 8 land sites released for sale by Singapore’s government last year, 3 of them were won by Chinese developers; their winning bids significantly high than the bids made by their competitors.

The most notable bid is a 99-year lease plot of land in Stirling Road, where a consortium of 2 Chinese developers, Logan Property and Nanshan Group, made a record-breaking bid of S$1.002 billion.

This was the first time that a purely residential site within the Government Land Sales (GLS) programme surpassed the S$1 billion dollar mark.

Notwithstanding that, another prominent transaction is the en bloc sale of Florence Regency, a HUDC development at Hougang Ave 2, where Logan Property again won with a bid of S$629 million, a far distance off from the other bids from rivals who reportedly refused to match the aforementioned bid.

The rather bullish approach undertaken by these Chinese developers can be attributed to mixed reasons, ranging from their own governmental issues to the current market climate for Singapore’s residential property market.

One underlying reason can be due to China’s monetary policy where they now allow the yuan to depreciate, in order for it to fall to its real value – thus keeping their exports competitive as a result of their weakening yuan.

However, on the flip side, Chinese-based developers would see the negative perspective on their current developments and thus seek alternative locations where they can capitalise on other currencies in case the yuan drops.

Regardless, the recovering and bullish private residential market is also proving to be an excellent investment proposition for the Chinese investors, with a promise of reaping substantial profits once the property cycle hits its peaks. Even profit margins of 10% is considered healthy for property developers in Singapore, thus providing the Chinese developers a realistic target for their investment forays.

However, it is crucial to note that money and profitability are not the only factors for Singapore as a private residential property haven. Other factors include the prestige and an excellent platform for portfolio diversification.

Singapore has always been viewed and regarded as a prime country for investments due to the world-class standards of living and facilities, a sentiment echoed by several prominent Chinese company leaders.

According to the Chief Research Officer at Noah Holdings Ltd of Hong Kong, a number of rich Chinese believed that Hong Kong, a rival to Singapore in terms of residential investment alternative, bears no difference as to investing in Shanghai in terms of diversification.

Furthermore, notable opinions include the fact that ‘Singapore is the Zurich of the East’ as well as ‘Singapore, not Hong Kong, (is) the bright head of China’s investment overseas’, made respectively by Xiao Xiao, Chief Operating Officer of Fortunes Capital and Li Qinghao, co-founder of Newbanker Tech Consulting,

All-in-all, we can expect a further increased rate of activities among Mainland Chinese developers and investors into the Singapore market for the foreseeable future due to the market conditions and reasons mentioned earlier.

It would not be a surprise to see even more significantly expensive deals as well, especially due to the cash-rich nature of the Chinese investors and their aggressive nature of spending in their forays into Singapore.

Nothing can be deemed as ‘unprecedented’ with respect to any record-breaking actions made by the Chinese here – 2018 may be a rather intriguing year to watch. 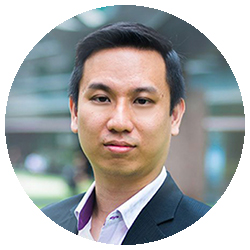 Redbrick Mortgage Advisory helps customers break down and compare over 120 sets of mortgage rates from 16 banks in Singapore. Alan joined Redbrick with a meticulous record in business banking, having won many awards and accolades during his stints at major banks like UOB, RHB, and DBS. Besides specialising in the area of SME Financing covering trade financing and commercial mortgage/refinancing loans at Redbrick, Alan is equally adept in residential property loans as well.