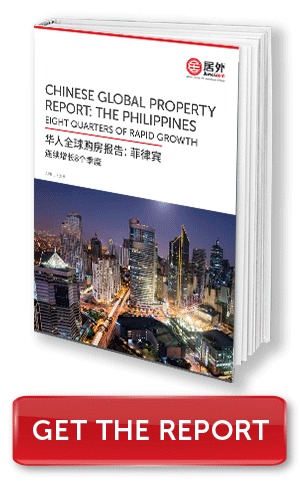 As western markets impose capital curbs, mainland Chinese looking to invest in overseas real estate have shifted their attention to Southeast Asia. The Philippines is one country that has seen a surge in mainland Chinese investors. Our country report on the Philippines tracks the country’s real estate industry, providing an in-depth insight - complete with statistics - into Chinese buying trends, preferred locations and the motivation behind purchases.

Here’s a sneak peek of the report’s findings.

Chinese interest in Philippine properties has been growing for the past five years, driven in part by warmer diplomatic ties between the two countries and a more investment-friendly environment. But recent property boom in Manila could be attributed to the expansion of Chinese offshore gaming firms operating in the country.

Last year, the rate of enquiries about Philippine properties hit a record high of 200.6 per cent on Juwai.com.

The Philippines now ranks 12th among destinations favoured by Chinese investors, indicating a rise in interest from its 19th position in 2014.

Manila is the preferred location for Chinese buyers. The capital city and its metro area accounted for 78.5 per cent of enquiries last year. Other areas near POGO (Philippine Offshore Gaming Operations) are also garnering attention and experiencing brisk sales. Even the idyllic island of Cebu is seeing an increase in enquiries. Smaller residences - one-bedroom, one-bath units - are most in demand among Chinese buyers.

Capital controls make it difficult for Chinese citizens to move large sums of money from the mainland to other countries. Hence, Chinese buyers are shifting their focus to less expensive property markets where their tightened finances can be stretched further. Philippine real estate fits the price shift.

The Philippines’ agreement to participate in the Belt and Road Initiative and other foreign policy cooperation with China have contributed to the influx of Chinese investment. Starting at just US$10.8 million in 2016, Chinese investments more than doubled to US$27.6 million in 2017. China now accounts for nearly one out of every 10 dollars of foreign investment in the Philippines. This bodes well for Chinese buyers looking at residential real estate as a good relationship between the two governments provides a sense of security for their investments.

The Philippines is the first Asian country to license offshore gaming. The industry, mostly dominated by Chinese operators, started off strong, and shows no sign of slowing down. With about 200,000 Chinese employees working in the industry in Manila alone, office and residential real estate development is fast tracking to accommodate the foreign workers. Many Chinese POGOs are purchasing condominium units to house their Chinese staff. Industry experts expect 15,100 new units to come onto Manila’s market by end of this year, with nearly half located in the Bay Area. Continued demand is expected to push prices – especially for luxury condos – to new highs.

Current World Bank forecasts project Philippine GDP growth rates of 6.5 - 6.6 per cent through 2021. That gives it the second-highest projected growth rates in all of East Asia and the Pacific. Furthermore, over the next decade, the government is set to embark on an ambitious US$180 billion infrastructure spending bonanza. The massive plan will complement China’s Belt and Road Initiative investments and help boost economic growth. For Chinese investors, this means they can reap long-term gains from a growing economy, housing demand, and higher property prices in the years to come.

Like this report sneak peek? Sign in now to download the full report and read why the Philippines is such a hotbed for Chinese property investors.