Quote of the Week: Chinese grab money off the printing press

"When Chinese investors come to the US to invest, they pretty much grab the money off the printing machine and come over here to buy cheaper stuff."

The Chinese currency has been gaining value over other world currencies like the dollar – that makes foreign investments seem less expensive.

That’s what Wilson Chen is referring to in today’s Quote of the Week.

The below currency conversion chart, from XE.com shows how the Chinese currency, the renminbi, can buy more US dollars today than a year and a half ago. 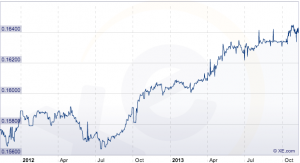 "Back in 2003, you could buy 8.28 yuan for a dollar, making China’s currency worth only about 12 cents," reports the Economist.

"Since then, China’s authorities have allowed the yuan to rise against the dollar by about 35%."

In fact, it is not even the main one. It does, though, mean they can buy more expensive international properties – and more of them.

Read the story this quote came from at the China Daily.

Quote of the Week: Chinese double down on Las Vegas strip

China’s investment in California to reach $60b by 2020