Rich Chinese: Much ado about Europe

If there’s one thing that’s clear, it’s that Chinese investors are becoming increasingly enticed by the world-beating price growth potential in European markets.

While European leaders attend summits, Chinese tourists are voting with their feet and their wallets, making Europe their second most visited global location in 2014.

Between January and October 2014, Europe welcomed 3.43 million Chinese tourists – up 10.4% y-o-y1 – bringing along investment spending as well as drawing attention from new investors wherever they go.

Baker & McKenzie and The Rhodium Group estimate that total investment by Chinese businesses and individuals doubled in 2014 to reach a total of $18 billion, taking the total outflow from the middle kingdom into Europe to $55 billion since 2009.2

These trends are playing out in the property market as well. While precise figures on residential real estate investment are hard to come by, the Rhodium Group estimates that commercial real estate alone saw approximately $3 billion dollars of investment in 2014, compared with virtually zero in preceding years.

On the residential side, Europe’s appeal partially comes from the range of investor visas and residency programmes being offered. While eligibility and minimum investments vary between location, approximately 10 European countries are offering visa schemes to attract foreign investors. 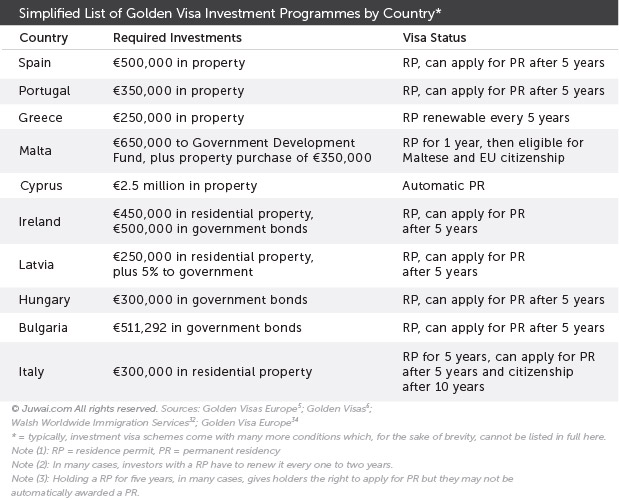 With solid demand in the market, Chinese investors are cementing their positions as important players in hotspots, such as Portugal’s Lisbon and Algarve7, as well as Spain’s Madrid, Barcelona, and Costa Del Sol.6

This complements sales in popular evergreen locations, like London and Paris, as well as explains interest in trophy purchases of vineyards7 and luxury properties8 across the continent.

But it’s not all just about hotspots and trophy purchases. Europe has a diverse range of locations that are becoming increasingly sought after, thanks to the above investor programmes and Chinese investors’ broadening horizons. Here is a breakdown of the latest updates on the hottest Golden Visa countries for Chinese buyers:

Price growth has cooled but foreign investor interest in Spain has grown during recent months. Juwai’s Q1 2015 GPI report showed a 2.1% price decline, however, total sales of properties to outside investors grew 9% y-o-y in the quarter.9 With an improving economic outlook (GDP is expected to grow 3.1% y-o-y in 2015, compared with 1.4 % y-o-y in 201410), Chinese investors are increasingly positive on the country – so much so that China developer giant Dalian Wanda recently announced plans for $3 billion of investments in Madrid alone.11

As of February 2015, the Portugese government, which pioneered the property investor visa scheme, has awarded 2,022 property investment visas12 since its inception in 2012 – 80% of which were granted to Chinese buyers. Property prices grew 1.8% y-o-y in Q1 2015, and are expected to grow 4.5% per year, on average, for the next five years, according to a RICS/Ci Portugese Housing Market Survey.13

Recent economic volatility may have impacted Greece’s allure to some Chinese buyers, but for savvy Chinese investors, the current situation and the investor visa scheme pose great buying opportunities. Greek housing prices are estimated to have tumbled between 40-50% during the past five years14, and the RMB’s recent strength against the Euro will have boosted Chinese buyers’ purchasing power.

Famed for its low taxes, enviable climate, and history, Malta offers a sweet deal in terms of its investment visa scheme – especially since it’s a part of the Schengen Zone and Eurozone. Increasing activity from investors saw luxury property sales in Malta soar by 40% y-o-y in Q1 201515, and chances are Malta will see growing demand as investors seek to lock onto one of Europe’s fastest growing markets – prices grew 11% y-o-y in Q4 2014, beating the EU average of 2.6%.16

The stand-out performer in Q1 2015. With 17.6% y-o-y price growth, Ireland has a strong economic outlook for 2015. Its  annual growth forecast for the year has been set at 3.6%18, compared with the 1.4% expected for the EU as a whole.19 However, while Ireland offers a bounty in real estate and business opportunities, the fact that it’s not part of the Schengen Zone may detract some of its appeal to Chinese buyers.

While Italy may lack a dedicated investor visa programme, its cultural heritage, locational diversity, and comparatively low pricing more than make up for it. Its “Golden Visa” – officially known as Elective Residence Visa33 – requires no minimum stay too, which is a bonus.35 With Q1 2015 housing prices down 30% from their 2009 peak20, investor interest is returning – total investment in Italian properties reached €5.5 billion in 2014, up 10% y-o-y compared with 2013.21

Investor visa programmes, improving economic growth prospects (3.5% y-o-y in 201422 and 3.1% in 201523, as compared with 1.5% in 2013), and a recent annual price growth of 6.7% y-o-y in 201424, have driven property investors towards Hungary. Total investment in commercial property alone grew 27% y-o-y in 2014.25 As for residential, Asian investors26, especially the Chinese buyers recently profiled by ECNS27, are finding Hungary increasingly attractive for its low cost of living and educational opportunities.

With home prices down 38.3% compared with their Q3 2008 peak28 and an ongoing investor visa programme, Bulgaria is showing initial signs of a nascent recovery, thus making it an up-and-coming destination to keep an eye on. International investors are increasingly turning to Bulgaria as a investment destination – Euroterra Capital recently launched its Zenith luxury development, specifically targeted at Asian investors29 in hopes of capitalising on the increasing outflow of business and residential investment from Chinese.

The island location has all the right attributes for foreign investors: great climate, dedicated investor visa schemes, and proximity to Europe. Nevertheless, recent cases of price manipulation by a small group of agents combined with competition from other attractive locations in Europe have cooled interest– sales in Cyprus have plunged 60% y-o-y in Q1 2015.17

What motivation lies behind this shift? Investor visas are playing a part in driving demand from China to Europe, but there are a whole range of other factors. Here are five of them:

“JiÄ Yóu” (åŠ æ²¹) is a popular Chinese catch-phrase that loosely translates to “come on!” and “up your game and get on with it”. Often used to motivate and spur people on to do their best, we can think of no better sentiment for European agents looking to sell into the market.– especially since investment from China is expected to grow to more than $18 billion in 2015.