9 reasons why Seattle is firing up Chinese buyer interest

Seattle has seen an enduring surge in popularity with Chinese property investors in recent years, but what lies behind this lasting fascination with America’s 3rd-best tech city2 that saw it surpass New York City to become one of Chinese homebuyer’s most enquired US cities last year?1

Chinese first became more aware of Seattle back around three to four years ago, thanks to the 2013 Chinese box office hit titled “Finding Mr. Right” – or “Beijing Meets Seattle” in Chinese – which drove massive Chinese buyer attention to Seattle in 2014.

In fact, Chinese buyer enquiries for Seattle leapt 803% y-o-y on Juwai.com in 2014, and Seattle’s popularity eventually saw Chinese buyers spending an estimated $1.5 billion on residential properties in the state during 2015 alone.3

It’s no wonder that Seattle, also hailed as the Emerald City, is Washington state’s jewel in the crown. Most recently, though, a flurry of construction projects within the city – driven by a spate of Chinese investment – has led to the rise of a new moniker that crowns Seattle as the ‘Crane capital of the United States’.4

Seattle had 62 cranes at work in Q1 2017 – that’s 18 more than Los Angeles, and three times as many as New York, and that construction boom is partly being driven by Chinese investors and developers.4 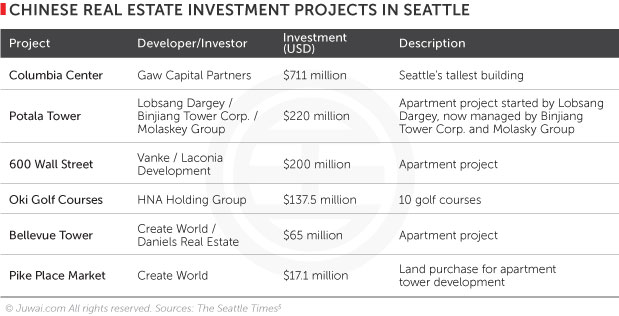 Interestingly, one of the main drivers behind Seattle’s burgeoning real estate development pipeline is thanks to myriad Chinese investment through the US government’s EB-5 residency visa programme.5

Rough estimates by The Seattle Times put total investment funnelled into Seattle projects through the EB-5 programme at $2 billion, with Chinese investors accounting for the majority.5

9 reasons why Seattle is winning over Chinese buyers:

What lies behind Seattle’s appeal to real estate investors from China? We delve into Seattle’s unique appeal as a highly attractive market, and share 9 factors that make Seattle a compelling alternative to other real estate hotspots in the US:

Hailed as one of the top US cities for millennials to live in6, 18, Seattle boasts a diverse choice of neighbourhoods – think Bellevue, Redmond, Mercer Island, and Carnation – as well as a range of waterfront properties that open out onto the picturesque Lake Washington and Puget Sound. Compared to most of the housing stock in China’s dense and highly-urbanised cities, that’s a stark contrast that greatly appeals to many Chinese real estate buyers. Beyond that, Seattle also offers a simpler, down-to-earth lifestyle that is far from the opulence in bigger cities, which may suit Chinese buyers looking for a more serene city to relocate to.7

Boasting average housing prices in Q1 20178 some 14% cheaper than Los Angeles9, 18% lower than Vancouver10, and a considerable 26% cheaper than San Francisco11, Seattle property prices compare favourably to other real estate hotspots in the US and Canada. For Chinese property investors who are increasingly on the lookout for better value for money, this is a no brainer factor driving them towards Seattle.

Ranked as one of the hottest US real estate markets in 2017 just slightly behind Orlando, Seattle offers excellent prospects for price growth, with forecasts of a 5.6% y-o-y rise in real estate prices during 2017.12 That makes Seattle a highly attractive prospect for real estate investors, particularly Chinese buyers who are always on the lookout for a bargain, and would consider Seattle properties a steal when compared with property prices back home in China.

With the Seattle-Tacoma International Airport (Sea-Tac) being one of the closest US airports to China, direct flight links between Sea-Tac and China have been growing steadily in recent years. Now that Xiamen Airlines, a subsidiary of state-backed China Southern Airlines, have launched a new direct route between Xiamen and Seattle13, this takes the number of weekly direct flights between China and Seattle to six, making it easier and faster for Chinese to travel to Seattle.

Education is a massive motivation for Chinese to purchase property abroad, and Seattle boasts some of the best public schools in the US. Three of its high schools rank within the top 200 public high schools in the US14, and Seattle’s University of Washington ranks 25th in the World University Rankings 2017.15 It also helps that Seattle is one of the top tech cities in the US and the world16, which brings us to the next point.

As one of the top tech cities in the US and the world16, Seattle is a tech job haven that offers consistent job opportunities, thanks to the presence of Microsoft and Amazon there. It’s also one of the most dynamic and rapidly-changing cities – Seattle has weathered the recession better than most regions in the past decade, and has surpassed the Silicon Valley to post a 43% increase in tech employment from 2001-2011, as well as 12% tech job growth over the past two years, according to Forbes.17 Tech aside, Seattle also offers much job opportunities in manufacturing, thanks to Boeing, as well as healthcare and maritime.18

With nearly 99,000 Chinese-Americans accounting for 2.7% of its total population even back in 2015, Seattle is home to one of the larger Chinese-American population in the US19, and we’ve yet to even include Chinese students and new immigrants who have becomes new residents in recent years. Such a significant Chinese population will weigh heavily with Chinese homebuyers, as many would be enticed and comforted by the fact that they will have access to Chinese culture, food, and people speaking the same language.

Being the birthplace of Jimi Hendrix, Kurt Cobain, and Starbucks, Seattle scores highly for cultural appeal. The city boasts outstanding museums as well, such as the Seattle Art Museum, plus quirky retail options like Pike Place to keep Chinese culture vultures occupied.

Sandwiched between water and mountains, Seattle offers much in terms of nature. Seattle’s city centre scores highly on the Urban Land Institute’s walkability scale20, but it’s also a short ride away from some of the US’s most beautiful natural attractions, including Olympic National Park, Mount Rainier National Park, and Port Angeles.

With cumulative Chinese foreign direct investment in Washington state businesses growing to $681 billion in 2016 – up 48.4% y-o-y21 – it’s clear that Chinese investors are building an increasingly large presence in Seattle and its surrounding area.

Suffice to say, this further reinforces the case for Seattle’s long-term potential as an investment hotspot for Chinese real estate buyers. Together with the fact that Chinese buyer searches for US properties grew 42.7% y-o-y on Juwai.com in February 2017, there has never been a better time to market Seattle properties to Chinese buyers than now.