Chinese LGBT buyers: the rise of a new consumer power

Today, China is the world’s third-largest ‘Pink Economy’ after Europe and the US, and these 90 million LGBT Chinese consumers – those who identify as lesbian, gay, bisexual, or transgender – make up a particularly important, prosperous, and rapidly-growing niche group that should not be ignored.

This is especially as Chinese buying behaviour has changed, splintering around criteria like life stage, personal values, and motivation as Chinese international property buyers grow increasingly numerous and sophisticated. Today, niche groups of buyers are establishing their own preferences when it comes to international property investment, second homes, and immigration.

China may be currently the world’s third-largest LGBT population, but that can easily change within the next few years, considering China has the fastest-growing LGBT community in the world. Already, the Chinese LGBT social app BlueD has 40 million registered users, surpassing the 30 million boasted by the international phenomenon Grindr.â 3

With an aggregate annual purchasing power of US$938 billion in 20171 – more than triple the US$300 billion of 2015â 1 – that makes the spending power of China’s LGBT community the third-largest and fastest-growing in the world.

By comparison, the spending power of the US LGBT community merely rose from US$933 billion to US$965 billion during the same three-years.â 1

Interestingly, surveys show that the average monthly income of Chinese LGBT is five times larger than the national average. Their advantage in disposable income may be even greater, because they do not have children.â 1 Higher incomes and disposable incomes also lead to higher levels of wealth over time.

The Chinese LGBT population is believed to possess household wealth worth US$1.5 trillion – more than their counterparts in every other country in the world, bar the US.â 3 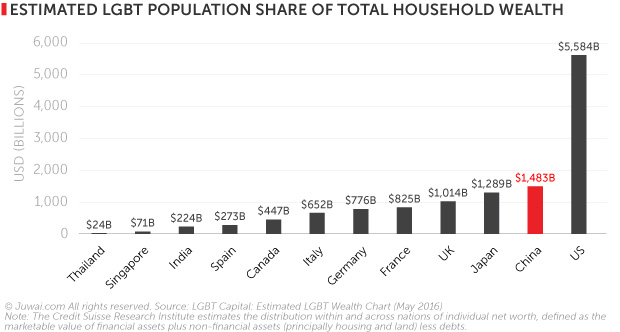 Despite the size and wealth of this huge minority, it is often overlooked because of their lack of visibility in Chinese society, and are almost completely ignored by property marketers in popular investment destinations.

However, Juwai.com believes the time is coming when marketing efforts tailored to this demographic will become necessary for property marketers hoping to obtain a slice of this US$1.5 trillion in savings.

Despite their spending power, LGBT individuals face difficulties in their daily life in China. In fact, homosexuality was officially classified as a mental health disorder in China as late as 2001, and more than half of mainland Chinese gays have reported social prejudice and unfair treatment in China.

58% report that their family’s attitudes towards their sexual orientation is one of ‘complete rejectionâ ’, and only 5% feel comfortable enough to live ‘out’ and publicly reveal their sexual preference.4

A respected university study estimates that 90% of Chinese gay men have engaged in sham marriages to satisfy familial and societal pressure.â 5 One website dedicated to helping stage fake marriages, Chinagayles.com, says it has 400,000 users and has facilitated more than 50,000 marriages.

The case of a man in Henan province is an example of the pressures Chinese LGBT can face. After revealing that he was gay, the man’s family committed him to a ‘conversion therapy’ programme, which involved 19 days of beatings and being force-fed drugs.â 6

Overseas, however, many feel free to openly express their identities and affections, as well as live openly with their partner of choice. Heeseon Xu and Jesson Liu of Chongqing are an example. Feeling repressed in their hometown, Xu and Liu told a journalist that they are saving to buy a one-bedroom apartment in Thailand, where the two men can settle down and live openly as a couple.

To better understand how Chinese LGBT buyers make their purchasing decisions, Juwai.com conducted consumer surveys. The following are three case studies of survey participants who agreed to be featured under pseudonyms.

"I want to live with my girlfriend in a small villa in town, surrounded by everything. I value privacy, so the fewer people around, the better. She likes to cook for me, so she has high expectations for the kitchen. I just want to have a swimming pool and enough space. Considering we hope to adopt a child in the future, it’s even better if the home could have a children's activity area."

“My biggest wish is to move to a quiet pastoral area. I want to have a cat and a dog, to be able to plant flowers, and perhaps grow some vegetables. The bedroom is the most important room because that’s where we write romance. I also hope the place would have a huge home theater, because we like to watch movies together."

"I hope to live in the city center with my boyfriend, so that transportation is convenient. If the population density is low and the green area is high, that would be really good. A large outdoor space would be suitable for our daily activities."

There is a strong correlation between locations that Chinese visit as tourists and places where they purchase property, whether for investment, immigration, or a second home. As much as Chinese LGBT are more likely to travel to gay-friendly or more tolerant destinations, they are also more likely to acquire property there. In short, Chinese LGBT want to own property in a place where they can enjoy visiting or living in freely.

It’s also vital to note that Chinese LGBT property buyers are not driven by the same needs as heterosexual families. This is because they are less likely to have children, so buying a home for a son or daughter to live in while studying at a foreign university is seldom an important goal for them.

This is significant, given that education is a primary motivation for as many as three quarters of Chinese buyers in some popular first-world destination. Instead, Chinese LGBT buyers are more likely to be buying a residence for their own use as a permanent residence or as a vacation home – whether it’s a condo in a sprawling beach-side development in Phuket or a riverside high-rise in Ho Chi Minh City.

All these brings us to the next big question: where are Chinese LGBT homebuyers looking to invest in overseas?

Find out in Part 2, where we share 5 cities popular with Chinese LGBT buyers right now.