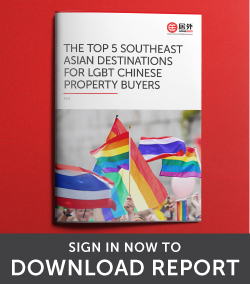 Thailand is perhaps the most tolerant country in Asia, and Bangkok is known as Asia’s gay capital. Same-sex sexual activity is legal in Thailand, and Buddhist monks often officiate over same-sex marriages.â 3 Even now, gay-oriented nightspots cater to Chinese tourists, with local bar owners adding Chinese songs to their playlists, while nearly a dozen travel companies offer gay-themed trips to Thailand.â 4

Some Thai developers even offer services, such as children’s play areas, gardens, fitness centers, and chauffeured Bentley limousines for residents’ use. One such developer is Sansiri, who reports that Chinese buyers make up more than 80% of its foreign customers.â 5

Despite Thailand’s weakened economy, Bangkok property looks like an appealing investment to Chinese LBGT buyers. Bangkok land prices have climbed 1,000% over the past 30 years in the cityâ 6, and prices for central condominiums have doubled in the last five years.â 7

"I have a lot of friends who don't feel safe in China and feel the need to hide. In Thailand, they don't have to worry," said Ji Chengfeng, a 37-year-old entrepreneur from Beijing, who was visiting Phuket on one of his frequent holidays in the kingdom.â 4

Prime residential prices in Manila have risen in each of the past three years, and rental rates have grown by 5–10% per annum.â 9 Starting prices are low by Chinese standards – a one-bedroom apartment listed on Juwai.com in Quezon City has a suggested starting price of about US$62,000.â

There are risks, however, including looming oversupply of new condo units and a thin rental market for the high-end condos that are so appealing to many Chinese buyers. Industry sources report that the Cambodian capital has 8,942 luxury apartments today, will have 22,828 by the end of 2018, and about 30,000 by 2020.â 10 And while these new condos are considered inexpensive by global standards, these properties are still well out of the reach of local buyers.

Buyers from Greater China make up about 25 percent of all foreign buyersâ 11, and foreigners can acquire up to 30% of new condominium projects. Premium residences in the central city are priced at about half the value of equivalent units in Bangkok – less than 10% of the cost of similar homes in Hong Kong – while more affordably-priced units can begin at less than US$150,000.

And while Juwai data reveals that Ho Chi Minh City receives less investment than most of the others on this list, but demand has been growing since 2016. In the first half of 2018, Chinese buyers made 68% more buying enquiries than in the prior half. A typical unit of a one-bedroom, one-bath apartment in a new, luxury riverfront project in Ho Chi Minh City go for as little as US$250,000.â