6 reasons why Chinese property buyers are attracted to Portugal

After months of confinement due to the Coronavirus pandemic, restrictions are gradually being lifted across Europe.

This has seen European real estate industry starting to pick up. Although Chinese capital has been severely reduced because of regulations introduced by Beijing to control capital flight, Chinese and other Asian investments into European real estate is expected to grow once the virus crisis is over.

Portugal, in particular, has become a key destination for real estate investment. Its capital, Lisbon, ranks highest as the most attractive city to invest in, according to a study – “Emerging Trends in Europe in 2019” - conducted by PricewaterhouseCoopers (PwC).1

In 2019, more than half of all real estate transactions in Portugal were purchased by foreigners and Portuguese real estate agencies have been actively wooing Chinese and Asian buyers.

According to a South China Morning Post article, Hong Kong is tipped to become one of the top sources of foreign investment in Portuguese property as residents seek a European haven from the civil unrest that has rocked the city since May 2019.

The study by PwC reveals that Portugal escaped the housing bubble of 1996-2007 which affected many European countries. Hence, the country was not hit by inflationary price increases, allowing it to maintain a low price per square metre in real estate.

Just to compare, an apartment located in the United Kingdom's most important city could cost approximately €21,179 per square metre in 2019 according to Statista, a German online portal for statistics.2 In Portugal, the price is only €2,941 per square metre for a Lisbon apartment, according to The Portugal News. The huge disparity in prices makes Portugal a very affordable deal for foreign investors.3

However, housing prices have been going up. Data from Instituto Nacional de Estatisca (INE) shows a 1.5 per cent increase in average housing prices in the third quarter of 2018. According to INE, 57 per cent of homes in Lisbon, Porto and Cascais were bought by foreigners.4

Lisbon is particularly attractive to foreign companies and high-net-worth property investors due to the city’s high quality of life and its growing economy. This perceived trend is spreading to other major cities in the country which are also drawing buyers.

However, the coronavirus crisis has slowed down this trend due to measures imposed by international governments to fight this pandemic together. The real estate market has been facing less demand as lockdowns and travel restrictions prevent people from travelling, hence curbing viewings and on-site appointments.

The Portuguese government has introduced many tax incentives to attract new investors. These include:

- Granting of “RHN” or Non-Habitual Resident status for foreigners. This exempts RHN holders from income tax for 10 years and a flat tax of 20 per cent for those who work.

- No wealth, inheritance or housing tax.

- No VAT on rents (with few exceptions)

- Tax exemptions on real estate capital gains, especially if they are reinvested.

Portugal has also legislated certain rules that protect the market and buyers. As such, financial risks for investors are low as interest rates, exchange rates and inflation are controlled by the Central Bank. Another factor that adds to the appeal of Portugal is the quick turnover time to purchase property – four weeks can be sufficient to get legal papers sorted out, say most real estate agencies in Portugal.

The “Global Peace Index (GPI) 2019”, a report produced by the Institute for Economics & Peace, ranks Portugal as the world’s third most peaceful country for the past there years after Iceland and New Zealand. The GPI ranks 163 countries and for the first time, includes research on climate change and peace.5

Like all countries which were affected by the Global Financial crisis which lasted from 2007 to 2017, Portugal was not spared. However, by 2017 the country has returned to growth, thanks to its tourism and export sectors. Unemployment rate also fell - 6.1 per cent in 2019 compared to 8.8 per cent in 2017 according to data by Trading Economics, an online platform that provides economic forecasts.6

Portugal is also pulling in foreign talent and investors too, especially in tech, according to a report in Sifted, a news portal backed by the Financial Times. Last year, Lisbon welcomed its highest ever number of greenfield foreign investments in software and IT, with 10 projects valued at USD75 million, thereby marking the sixth year of growth in this regard, according to fDi Markets, a Financial Times data service monitoring tangible projects that create new jobs.7

The country’s spectacular recovery has also seen many international companies such as Google and Amazon setting up their European bases in Portugal. Other European companies choosing to work with IT providers in Portugal include Volkswagen and Mercedes-Benz, Vestas (a Danish wind turbine company), Credit Agricole and BNP Paribas.

Portugal’s tourist numbers have risen uninterruptedly for the past decade and the sector has been a powerful growth engine, supporting the country's recovery from the 2008/2009 financial crisis, which almost brought the country to the brink of collapse. A total of 27 million tourists visited Portugal in 2019, more than twice as many some 10 years ago, according to INE.

As the tourism sector grows, this has led to a scarcity of rental properties while driving rentals up. For investors who own properties to rent out, this is good news because they will receive high rental income, especially in tourist hot spots.

Since its inception in 2012 and by August 2019, the scheme has granted visas to more than 20,000 persons (7,885 investors and 13,364 family members), according to data from the Portuguese Immigration and Borders Service (SEF).

This has made it one of the most popular Golden Visa programmes of its kind in Europe. Through property investment alone, the programme has attracted over €4.8 billion, which has been by far the most popular way of accessing this highly beneficial programme. Chinese property buyers have been leading the charge in pursuing Portugal’s Golden Visa, according to SEF.8 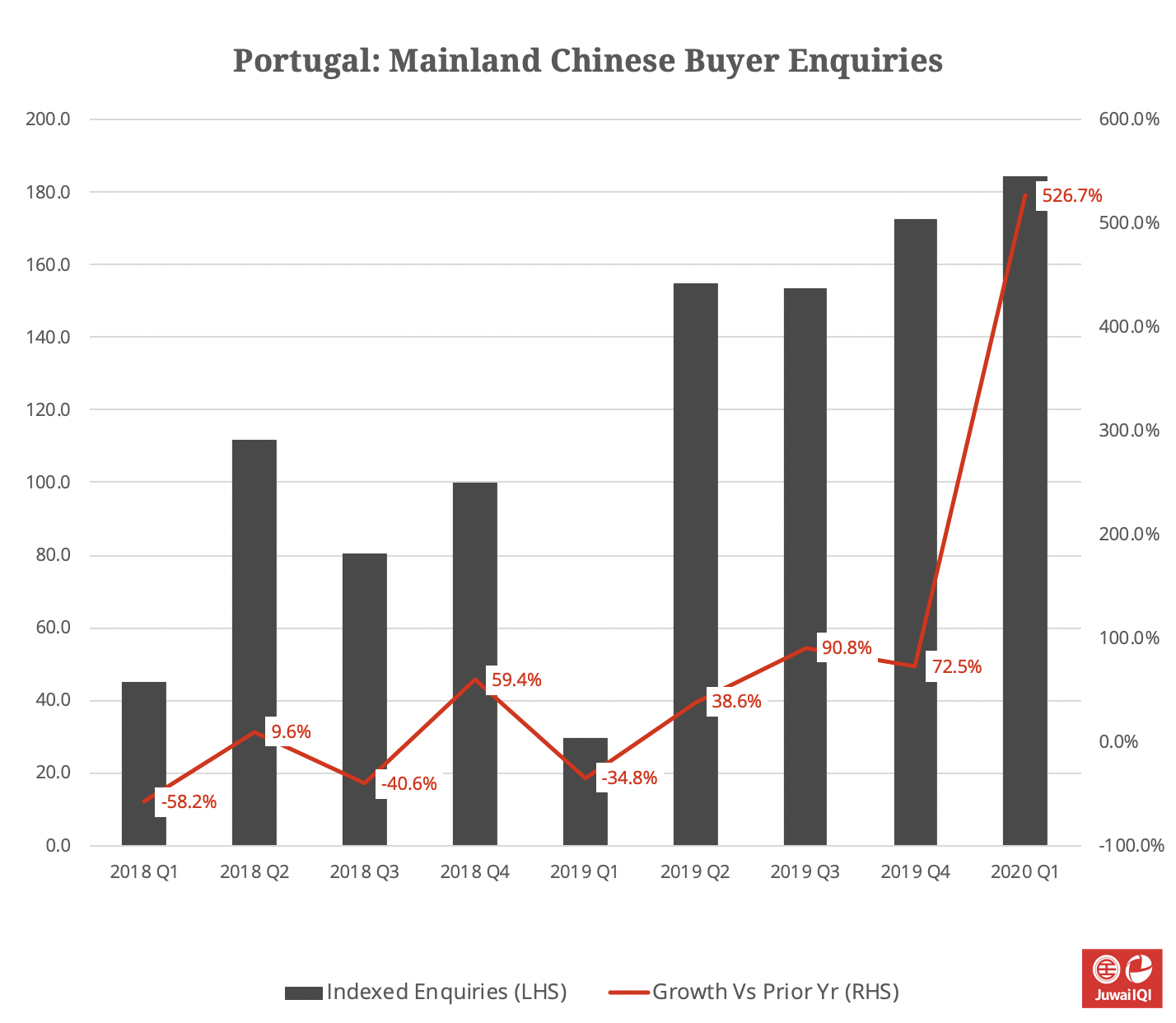 According to Georg Chmiel, executive chairman of Juwai.com, â€œYou need only to invest about USD560,000 into Portuguese real estate to qualify for the Golden Visa. In 2018, Chinese invested about USD300.2 million into Portugal through the golden visa programme. Nine out of 10 of those dollars went into real estate. Since the programmeâ€™s inception, according to official data, Chinese nationals have taken 60 per cent of all visas issued. Chinese have invested an estimated USD2.8 billion into Portugal through the golden visa programme.â€ Chmiel added that Juwaiâ€™s data based on enquiries the website received, shows that Chinese demand for Portuguese property climbed in the second quarter of 2019 by 40.4 per cent, their highest level since 2016.

Some of the advantages of obtaining a Portugal Golden Visa include travelling visa-free in Europe’s Schengen Area and eligibility to apply for Portuguese citizenship after five years of legal residency. But some changes have been announced to the Golden Visa programme. New rules that will take effect at the end of 2020 will not allow foreign investors who buy properties in major cities such as Lisbon and Porto to qualify for the programme from 2021 onwards.

But until the regulation takes off, there is still a window of opportunity to utilise the popular Golden Visa programme via property investment. It is also important to note that the changes will only apply to Golden Visa applications filed after the enacted date and will not affect submitted applications, be they pending or ongoing.

Although the COVID-19 pandemic is causing an economic crisis at world level, Portugal is managing the crisis far better than other European countries. This has earned the country the honour of first European country to be awarded the “Safe Travels” seal by the World Travel & Tourism Council.9 The seal aims to recognise destinations that comply with health and hygiene rules aligned with the Safe Travel Protocols.

These protocols are guidelines specially developed by the WTTC itself to address the consequences of the Coronavirus pandemic in the tourism sector, promoting consumer confidence so that they feel they can travel safely once restrictions are lifted.