And 2017 promises to be another goliath success, with global consulting firm Oliver Wyman predicting Singles' Day online transactions will grow by 26% to reap a record-breaking $23 billion (152 billion yuan).2

The story behind Singles' Day

While Singles’ Day first began as a student festival at Nanjing University to celebrate singlehood back in 1993 (a play on the four 1’s in 11.11 representing singlehood)3, it has now evolved into a day that’s promoted for China’s single people shop for gifts as a treat for themselves. 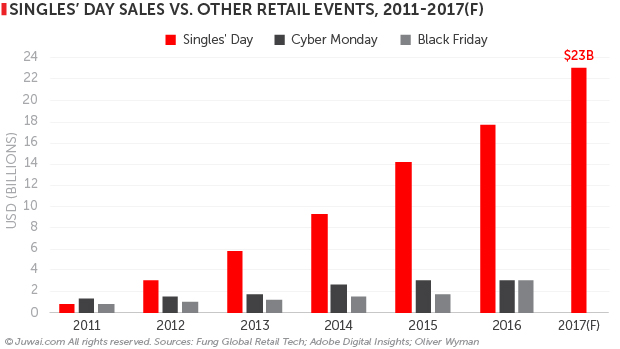 Leverage the power of Singles' Day

Today, retail brands from all over the world take advantage of Singles’ Day to get in front of Chinese consumers online, and the growing numbers speak to the strength of Chinese consumers’ increasing buying power and growing appetite for international products.

In fact, Alibaba alone received 657 million delivery orders during last year’s Singles’ Day – a 41% increase from Single’s Day 2015 that only charted 467 million orders1 – because it targeted the event solely at China’s rapidly-growing population of netizens, which now dominates as the world’s largest online population with 751 million internet users as of July 2017, 96.3% (724 million) who go online via mobile.6

That said, Singles’ Day is a perfect example how one can leverage the power of online to tap into the largest, most lucrative, and fastest-growing consumer base in the world.7

With China's online retail market projected to be worth $1.7 trillion by 2020, this is one market you cannot afford to ignore.

Read about what big retailers did in 2016 for Singles' Day here.