Emmanuel Macron is the next President of France, and his landslide win bodes well for ties with China.

France is already a hotspot for Chinese, with 2016 bringing in over 2 million Chinese visitors to France, as well as $4.16 billion worth of investments from mainland companies.1

That’s because France is one of China’s most favoured investment destinations in Europe, seeing close to $15 billion in direct investment by Chinese companies up to the end of 2016, according to the Heritage Foundation.1

And now, Macron’s election as French President is likely to entice even more Chinese companies and investors to China, even as his victory is expected to bring more stability to the European Union (EU).2 Here are 3 reasons why.

For starters, Macron has shown a marked willingness to improve Sino-French relations3, and has been quick to start laying foundations to increase trade and investment between France and China.

China President Xi Jinping was one of the first few world leaders who Macron spoke to after winning the French election.3, 4

Macron has also made it his personal mission to promote France as an alternative to the UK for banks and financial services companies looking to relocate operations out of Britain to another European base after the completion of Brexit, with Paris touted as one of the best-equipped cities to handle international transactions and personnel.5

Among some of his promises include simplifying the French tax and pension systems, as well as reducing red tape in Macron’s attempt to wrest business away from London.5

All in all, a Macron Presidency looks set to not only help China forge closer ties with Europe, but also aid China in its efforts to push its ‘One Belt, One Road’ (OBOR) initiatives into Europe.6

At 39 years old, not only is Macron the youngest President in French history7 since Louis-Napoléan Bonaparte (Napolean’s nephew and heir)8, but Chinese social media has been all abuzz over his remarkable relationship with his 64-year-old First Lady Brigitte Trogneux.9

More than nine million Chinese have viewed and commented upon the 25-year age gap between Macron and the new First Lady on WeChat posts.9, 10

In fact, Chinese netizens have been so enthralled by Macron’s relationship that a new nickname for Macron has gone viral, with many Chinese social media fans referring to him as ‘The European Qi Tongwei’ – a character in a popular China TV drama ‘In the Name of People’.9

Nevertheless, the Chinese take on Macron and his First Lady has been mostly favourable, with many lauding Macron’s relationship as a romance befitting the French reputation for romance and love.9

All these intrigue and curiosity over Macron could potentially raise France’s profile among Chinese, just as it had raised the profiles of other countries in the previous cases when Canadian President Justin Trudeau visited China last September or when China President Xi Jinping visited the UK in December 2015.

Macron’s election happened at a time when France is ramping up efforts to attract more Chinese travellers in efforts to carve a share of the estimated $109.8 billion spent by Chinese overseas in 2016.11

Back in 2015, the French government made sweeping changes to simplify its visa policy for Chinese visitors, such as enabling Chinese travellers to apply for a Schengen visa to enter France without the need to supply hotel bookings, income proof, and flight confirmations.12

Visa processing times for Chinese visitors to France have now been reduced to just one day13, a far cry from the eight-week wait back in 2011.12

Additionally, French banks and retailers are making it easier than ever for Chinese travellers to spend when visiting France. China UnionPay – the most popular card payment service in China – is now accepted in close to 60% of all ATMs in France, as well as at 100,000 different retailers across France.14

Other attempts by the French government to attract Chinese visitors in recent years include increasing the rate of tax refunds for Chinese tourists who shop in France15, rolling out more video surveillance in areas where tourists have been targeted16, as well as increasing cooperation with Chinese police to ensure better safety for Chinese travellers in France.15

More importantly, these efforts seem to have worked. Despite the terror attacks in Paris and Nice that led to a slump in tourist arrivals in France, Chinese travellers have begun to return â€“ Chinese made up about 1 million out of the 1.8 million Asian arrivals in the Paris region in 2016, according Francois Navarro, Managing Director of Paris Region Tourist Board.13

Considering France has also approved new flight connections between France and China15, this enhanced connectivity, together with the above efforts, could vastly increase the appeal of France to not just Chinese tourists, but also to Chinese investors looking to buy French property as well.

France as a property investment destination 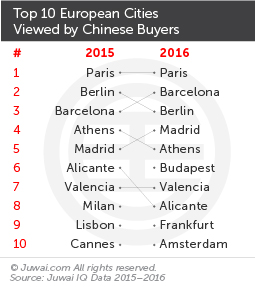 Boasting the iconic Eiffel Tower to the Arc de Triomphe, Paris is undoubtedly a desirable pick and landmark investment for many Chinese buyers looking to buy in France.

Paris topped the 5 most-viewed French cities by Chinese buyers on Juwai.com in Q1 2017, followed by Cannes, Bordeaux, Roquebrune-Cap-Martin, and Nice.

In fact, the city of love was the most-viewed European city (excluding the UK) by Chinese buyers on Juwai.com in both 2015 and 2016, according to our Juwai top 10 Chinese buyer picks for 2016.

With yields of close to 4% compared with sub-2% yields reportedly available in Beijing and Shanghai17, such robust investment returns add to Paris’s already strong profile as a global, multicultural city with a wealth of attractions, a long history, and a vibrant retail sector.

Furthermore, Paris is bidding for the 2024 Olympics.13 If Paris succeeds, this could herald good tidings indeed for its property market, should the ‘Olympic Effect’ happen and drive property prices as it did for past host cities London and Beijing.

Asides from Paris, the South of France is increasingly rising in demand with Chinese real estate investors too, particularly the Bordeaux region, where more and more mainland investors are eyeing the French vineyard market, thanks to a growing wine consumption in China that has led Chinese to become the world’s largest wine consumers in 2016.18

Currently, Chinese own over 150 (or 2%) Bordeaux vineyard châteaux18 – a big jump from 50 in 2014, as mentioned by our previous story here – and famous owners include Chinese celebrities like Chinese actress and director Zhao Wei, as well as tycoons such as Jack Ma, Alibaba founder and currently the richest person in China.19

For context, Belgian buyers in Bordeaux took 70 years before acquiring more than 100 châteaux there, according to The Telegraph.18

Zhao Wei, who first bought Château Monlot back in 201120 before purchasing Château Senailhac and Château La Vue21, was one of the earliest Chinese celebrities to foray into French vineyard investment.

Jack Ma, who is friends with Zhao Wei, bought the 200-acre Château de Sours in February 201622, 23, and then followed up by acquiring Château Perenne in Blaye Côtes de Bordeaux four months later.22

In fact, Jack Ma and Zhao Wei have joined hands with a group of Chinese billionaire friends with the intention to invest in more Bordeaux châteaus over the next few years.24

To date, it is believed that there are now 15 Bordeaux châteaux within the group, which does not share ownership but collaborate for distribution and certain operations.25 The group has formed their own négociant company in Bordeaux as well, called Cellar Privilege.25

Could such celebrity appeal inspire other Chinese to consider investing in French vineyards? Perhaps, seeing as how Zhao Wei’s Bordeaux investments once galvanised a Chinese buyer into approaching Juwai.com to help him acquire a vineyard in France back in 2015.

Is the timing ripe for Chinese to buy in France?

According to Inman, the Chinese focus on luxury real estate in Europe is on the rise26, and France is well poised to leverage that, given that Macron’s high-profile election has trained Chinese eyes on France.

After all, France is home to versatile investment options, offering Chinese buyers myriad lifestyles ranging from sophisticated streets of Paris and the high-life in Nice, to the idyllic verdant of Provence.

Combined with fact that the French government is making efforts to roll out the red carpet for Chinese investors, as well as the fact that China's domestic restrictions are increasingly driving Chinese property buyers overseas, we believe the time is ripe for Chinese buyers to hone in on France soon.