Rich Chinese were most interested in healthcare in 2016, according to Hurun Report, while sports came in a close second.1

The Chinese proverb of ‘å¥åº·æ˜¯æœ¬é’±’ (Jiàn kÄng shì bÄ›n qián) – which translates to mean ‘health is your capital’ – is a concept fully embraced by Chinese, who define health as a personal asset that they need in order to provide for their families.

And now, rising incomes have led to growing awareness of wholesome living in China, with many middle-class and affluent Chinese increasingly embracing healthier habits to meet their demands for a better life.2

From shelling out top dollar for organic food and health food fads such as detox and juice cleansing, to paying a premium for personal trainers and gym memberships3, many Chinese are willing to lavish time and money in their pursuit of an ideal and healthy lifestyle – including moving overseas.4, 5

64% of Chinese high net worth individuals (HNWIs) emigrate abroad due to environmental pollution. Another 53% are driven by a desire for an ideal living environment, while 29% move overseas for medical care.6

With many Chinese hopping onto the ‘health’ bandwagon, it’s clear to see that the mindset of ‘health = better life’ is increasingly shaping Chinese buyers’ overseas plans. We shed light on how the burgeoning Chinese focus on health is propelling Chinese real estate investors abroad:

Fresh air may be free in the UK, but a UK entrepreneur is selling jars of it for $100 each to Chinese buyers seeking a breath of fresh air.7

With Beijing and Shanghai having markedly higher levels of PM2.5 than other major world capitals like London, New York, Paris, and Sydney, mounting environmental concerns in China have sparked demand for cleaner and healthier lifestyles.6, 8

Already, the Chinese government is already making efforts to improve urban health and reduce air pollution in China, including the launch of the ‘Healthy China 2030’ Plan by China’s Central Party Committee and the State Council9, which pledges to improve China’s air quality by lowering its CO2 emissions.

Through the ‘Healthy China 2030’ plan, the Chinese government also aims to bump up life expectancy and boost health in China, such as by strengthening public sanitisation, and setting up an environmental protection system that will comprehensively monitor pollution of all kinds, including air, noise, water, construction, and soil pollution.9

Nevertheless, despite the government's commitment, many Chinese not keen to wait, the number of Chinese seeking cleaner, healthier surroundings when it comes to choosing travel and investment destinations is still on the increase. 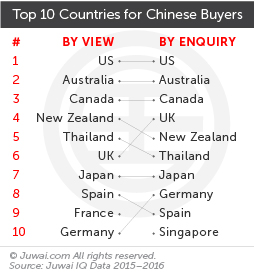 Ctrip – China’s largest online travel agent – reported heavy search volumes in the beginning of 2017 for keywords like ‘smog escape’ and ‘lung cleansing’ linked to growing travel bookings for locations Chinese perceive will offer the freshest air, such as Iceland and Antarctica, as well as island paradises like the Maldives and the Seychelles.10

On Juwai.com, we’ve noted that this quest for fresh air extends to Chinese demand for overseas property too.

The World Health Organisation ranked the US, Canada, Japan, Australia, and New Zealand as the countries with the most amount of cities with clean air in 201611 – the very same markets that were some of the most popular investment destinations for Chinese property buyers on Juwai.com last year.

A coincidence? Perhaps not.

By 2030, China’s silver generation will have an extra 175 million people aged 60 years+, many who are increasingly looking for an overseas base to spend their golden years.

Hurun Report further reveals that Chinese HNWIs seek to enjoy an enriching and independent retirement, and many intend to fully immerse themselves in a life of leisure and travel extensively.1

With closer travel links and easier visas now, it has also become much easier – and desirable – for China’s senior citizens to retire abroad where life is more relaxed and relatively safe, preferably with good medical facilities that are within easy reach.12

It’s against this backdrop that such demand has sparked major deal flow in locations favoured as retirement hotspots, such as Canada, the US, and Australia, as well as upcoming hot picks like Portugal, Spain, and Southeast Asia.12, 13

And governments are aiming to capitalise on this trend, such as Thailand and Malaysia, who both offer retirement visas that appeal to Chinese.4, 12

#3 Overseas healthcare perceived to be better than in China

China’s healthcare market has burgeoned swiftly in recent years, yet rapid urbanisation, combined with a large and fast-ageing population, has put a strain in China’s health system.

This is because the elderly have higher rates of chronic diseases, while China’s 1.87 million HNWIs16 â€“ in their race to build their careers and business empires â€“ tend to lead high-pressure lifestyles and prefer to get the best quality healthcare in the shortest time frame possible.

As such, demand for overseas medical services and wellness treatments has boomed1, and people in China – from its rich and wealthy to its growing base of retirees, as well as its progressively health-conscious middle- and upper-middle-class population – are all warming up to the idea of heading abroad for healthcare.

With this in mind, top medical destinations boasting outstanding healthcare options and medical facilities like the US, Japan, Germany, the UK, Singapore, Malaysia, and Thailand17 rank highly as property investment hotspots for homebuyers from China as well.

Chinese want healthier food, and this is one trend expected to flourish till 202618, particularly as rising concerns over obesity and heart health has motivated Chinese to become more health-conscious when it comes to their dietary habits.18

China is now home to 43 million men and 46 million women classified as obese, surpassing the US to become the world’s largest overweight population.19

Changing aesthetics in China has also driven the desire for a toned, sculpted body amongst Chinese, spiking nutritional awareness and prompting many to embrace clean eating and healthier diets.

However, it’s not just all about eating healthier, food hygiene and safety are also at the foremost of their concerns – a 2017 China Youth Daily survey revealed that 77.3% of its Chinese respondents cited food safety as their top concern.

Driven by concerns over the safety and quality of domestically-produced milk, China will import 450 million tonnes of milk powder in 201720 – a 10-fold increase on 2008 that has created a $394 million sales bonanza for Australian milk company a2 Milk.21

With most Chinese having stronger faith in overseas food quality standards, it’s this desire for clean, quality food that is justifying their growing appetite for properties in countries famed for food quality, hygiene, and healthy eating – Australia, New Zealand, and Japan – as many increasingly consider emigrating for health reasons.22,23

From highlighting nearby medical services, sports centres and gyms in your listings, to offering them a compiled list of medical practitioners and specialists contacts, to even giving them a quick tour of your city's best spots for healthy eating or to procure local, organic food...there are many ways for you to play up the healthcare angle in your product offerings for a truly comprehensive and persuasive pitch.