China's $1.7 trillion online retail market and how to profit

That’s close to double total online sales in the US2, ten times sales of $74 billion in Germany3, and nearly 20 times the $38 billion seen in India.4

Online retail’s explosive performance in China is even more astonishing given that China saw only $3.5 billion of online retail sales in 20065, meaning the online retail market has exploded by more than 200x in the last decade!

This eye-catching performance has cemented China’s online retail market as: 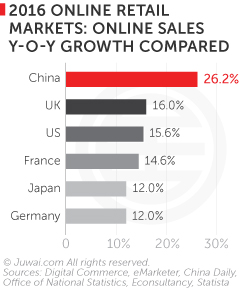 Online retail has been so successful that, according to a recent survey by the Consumer Technology Association, 60% of Chinese consumers buy at least one product online each week, while 48% buy all the products they want online.8

The rapid adoption of smartphones lies at the foundation of this trend.

China is home to 751 million internet users – equivalent to the entire population of Europe – and 96.3% of them (724 million) access the internet via their smartphones in H1 2017.9

That’s an astonishing increase from the 695 million mobile internet users charted merely six months earlier at the end of 2016.10

Such exponential growth is also a massive leap from slightly over ten years ago in 2006, when the total number of Chinese mobile internet users was estimated at only 17 million, based on data from the China Internet Network Information Center (CNNIC).11

Online retail sites have tapped into Chinese consumers’ buying habits by developing user-friendly apps, such as WeChat and Taobao, which not only offer rich product content but also enabled integrated payment functions like WeChat Pay and Alipay.

According to research by Boston Consulting Group, these functions have met with considerable success, channeling some 61% of online sales through mobile phones in 2016.12

Online retail has not only succeeded because retailers have adapted to China’s huge smartphone user base, but also because the most successful sites have developed rich platforms capable of cost-efficiently penetrating far and wide across China’s colossal land base.

Platforms like Taobao have created a new norm for Chinese consumers’ online behaviour, which differentiates it from that in other countries. That’s why, unlike in the US and UK, Chinese consumers rarely visit company or brand websites, because they are used to finding what they want from online marketplaces like Alibaba’s Taobao, which has evolved to include many different sales lines.

This model of master platforms offering access to a whole range of differentiated products has been the foundation for other online retail success stories in China, including:

JD.com debuted in 1998 as an electronics retailer13 but grew to become the second largest B2C online retail platform in China. Offering a full range of goods from furniture and food to fashion, JD.com booked a huge RMB 372 billion ($55 billion) in sales in 2016.14

Today, JD.com has a full range of retail options on its platform, ranging from Walmart to Calvin Klein15, and capitalises on the increasing demand from Chinese consumers for outstanding customer experience by offering seamless, rapid delivery – often within 24 hours – from its network of warehouses across the country.

Ctrip.com offers a full range of travel booking services – ranging from air, sea, and train tickets to bespoke luxury tours17 – to China’s increasingly discerning, diverse, and adventurous market of overseas travellers, which is booming stronger than ever.

By 2020, China’s outbound tourist boom is set to expand to 200 million trips, and will likely account for 10.9% of global travel bookings.18

Ctrip’s immense success and rapid growth even recently gained its CEO Jane Sun a spot as one of the top 50 businesswomen leaders in the world on Fortune’s ‘Most Powerful Women International’ list.19

Focus on driving factors for success

In the case of JD.com, the company has capitalised on Chinese buyers’ demand for not only online goods, but also outstanding service and unique customer experiences. In the case of Ctrip.com, that company is focused on growing demand for overseas travel from Chinese.

That’s where going online to sell property to Chinese can be a game changer for your business. Chinese buyers are on the lookout for properties across the globe, and are expected to invest over $80 billion in overseas real estate in 2018.20

The US is one example where Chinese buyers have been a significant force. Total investment in US residential real estate came to $31.7 billion in 2016, up 16.1 % y-o-y, taking the total invested between 2010 and 2016 to $120.7 billion, according to the National Association of Realtors (NAR).

With these examples in mind, plus Chinese investors’ increasing demand for overseas real estate, online channels offer an outstanding opportunity to tap into an increasingly vibrant and lucrative source of sales.

So get focused, prepared, and proactive to capitalise on Chinese buyer demand by building an effective online presence to stake a claim for this lucrative market, because China’s online revolution is going to run and run, with Goldman Sachs projecting sales of $1.7 trillion in 202021 as Chinese increasingly favour online channels to manage all aspects of life.

New to the Chinese market? Learn more about the challenges Chinese real estate buyers face when venturing overseas, why education and f clean environments are huge motivators for them, and why Chinese buyers consider overseas property to offer much better value.