This is vital for agents/brokers to note, because China’s fast-growing student population seeking an international education is one of the principal drivers of outbound real estate investment from China.

After all, education has long been highly-prized by Chinese, as the benefits gained from a family member having a good education could span several generations.

So if you haven’t factored the Chinese incessant focus on education into your real estate offerings, then chances are high that you’re missing deals from China.

According to Juwai Data, 70% of Chinese buyer enquiries in 2015 for the US – the #1 investment destination for Chinese buyers – was tied to education.2

This rings true, as the US is also the top education destination for Chinese students.

Over in sunny Australia, the second most popular investment country for Chinese property hunters, education-linked property enquiries delivered a steady flow of leads that totalled a whopping A$1 billion ($745 million) in 2015 alone.4

Besides that, the Hurun Report ‘2015 Annual Chinese HNWIs Asset Allocation White Paper’ also revealed school districts to be the most preferred locations for Chinese real estate investors in their property searches as well.5

All these clearly illustrate the importance and impact of education when it comes to Chinese outbound property investments. And now, yet another booming trend has emerged, which further asserts the influence of education on Chinese buyers. 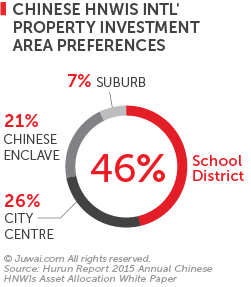 According to the Economist, ‘Tiger Mums’ – supported by easier visitor visa policies – are increasingly accompanying their children abroad to not only care for their children, but also to lay the foundations for long-term emigration overseas.3

More often than not, this includes buying a property to live in, which is seen as a better value for money as opposed to renting by rich Chinese.

And as the flow of Chinese students going overseas continue to grow, this tendency of cashed-up Chinese buying homes for their children studying overseas is resonating in markets all over the globe, ranging from Palo Alto6 to Paris7, Cambridge to California, and from New York to New South Wales.8

6 factors behind the Chinese obsession for education abroad

Before you pitch for education-related investment, first you have to know your customer. Here are the six main criteria that Chinese students and their families value most when looking at overseas schools and colleges:

What this means for international agents/brokers

This voracious pursuit for quality international education by Chinese bodes well for international agents/brokers indeed, because the number of Chinese students heading out of China to study is booming, and can only continue to go up in the near future.

In fact, given that China is currently seeing a strong surge in demand for international schools, especially with China's fast-burgeoning middle-class17, we foresee a huge amount of Chinese students in the pipeline for overseas education.

China is now home to the most international schools in the world, with revenues tripling to 18.4 billion yuan ($2.75 billion) by the end of 2013.17

This is because for Chinese students â€“ especially those who aren't send overseas to boarding schools at a young age â€“ China’s international schools are considered a useful stepping stone to gaining a good education abroad.

Not only are international curriculums taught in a bilingual environment, but students are also offered wider exposure to both the English language as well as international education systems, leading to a smoother transition when they head overseas for higher learning.

Wealthy Chinese families also see enrolling their children in international schools as a status symbol too, giving them more ‘face’ with their peers.

That said, we believe all the above has laid bare to you the importance of education in the eyes of Chinese buyers. What's more, we hope you have gained a clearer understanding of the criteria Chinese parents seek, which will help you adjust your listings accordingly.

Because with the rising power of China's rapidly-growing middle-class population, and the potential baby boom thanks to China's two-child policy, building a reputation as a go-to agent for educationally-driven investment will be an absolute goldmine in the China market.