If there’s one thing that Chinese high net worth individuals (HNWIs) desire the most for their children in modern times, it’s giving them an international education overseas.

459,800 Chinese students ventured abroad for studies last year – of which 423,000 received private funding from their families.1

Clearly, the rising prosperity in China has liberated the educational aspirations of wealthy Chinese – many who consider an excellent education as a crucial family investment, as this elevates the entire family to higher level financially and in lifestyle.

China is home to the world’s fastest growing “new wealth builders” (NWB), whose total NWB assets amounts to US$19.5 trillion.2

80% of China’s rich have definite plans to ship their children abroad to study3 – some even as young as the early age of seven.4

That’s compared to only 10% of wealthy Germans and 1% of rich Japanese who opt to do the same for their offspring.5 This stark contrast reflects the magnitude of Chinese enthusiasm for education overseas.

Now, China’s middle class is jumping onto the bandwagon.

A recent corporate survey on Asia’s middle class by TNS Singapore – on behalf of Visa – revealed that China (51%) is the most willing country in Asia to send children abroad for education, followed by Hong Kong (39%) and India (34%).6

What drives this fervent ambition of Chinese parents to ship their child to a foreign country at such young ages?

Fact is, all this zeal for a foreign education stems from the belief that an overseas education offers their children a broader outlook on life and wider career options. And with so many Chinese having the same view, competition in vying for a spot in prestigious schools overseas is stiff.

So the earlier their child is exposed to a foreign environment, the faster they would pick up English and adapt, thus increasing their child’s chances of nabbing a spot in the distinguished universities like Cambridge or Harvard.

Last year, Australia’s middle school started accepting students – many who hailed from China – for Grades 7-9.7 Preparatory schools are on the rise, too, such as Packwood Haugh School in England for students whose ages range from four to 13.7

Obviously, the Chinese are not holding back in their attempts to stay one step ahead of the rest. After all, if you snooze, you lose.

Thanks to the Chinese dream of elite and Ivy League educations for their children, the US and the UK have consistently reigned as the top two education destinations for the scions of China’s rich and powerful.

US ranks #1 for undergraduate and postgraduate studies for Chinese students, while the UK is the numero uno of Chinese HNWIs for middle school and high school education.3

Consistently popular Australia and Canada trail behind at the third and fourth spot respectively, while newcomer New Zealand round up the list of the top five education hotspots for affluent Chinese.

The spill over effect on global property investments

Also very noteworthy, though, is that these five favourite countries are also the latest top five property investment destinations for Chinese buyers on Juwai.com.9

Just as the US ranks top as an education choice for Chinese, it also reigns supreme as the #1 country for Chinese property investors.

Chinese buyers splurged US$22 billion on real estate in the US last year.10

Coincidence? We say not.

It’s simple. For Chinese parents who (mostly) have only one child due to China’s one-child policy, everything has to be the best for their child.

From sending them to the most elite schools in the world to giving them the finest food, their solicitude for their child’s welfare naturally extends to the creature comforts for their child when studying away from home. 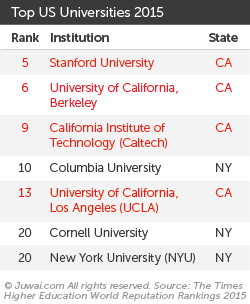 Rather than letting their child cohabit with strangers in dorms, they prefer buying an apartment or house for their child. Not to mention the fact that it’s a sound investment.

In hindsight, this is pretty sweet deal for rich Chinese that kills two – no three or more – birds with one stone, as they can:

All with a single property purchase in the foreign country of their choice.

This trend aligns with Juwai data, which shows California and New York are the two most popular states in the US for Chinese buyers.

While sunny skies in Los Angeles and the swanky high-rise condos in the Big Apple draw Chinese buyer interest – it’s the top-notch education offerings that ultimately attract the big bucks.

Four out of the top 20 American universities are in California, while three are based in New York.8

So, take a good look at your current listings, agents. Because the clear takeaway from this is that having schools or universities within close proximity of your property listings could greatly boost its appeal to Chinese buyers. Make sure you’re highlighting and talking about that.

Whether you are in Canada or New Zealand or Europe, if your listings have educational institutions in the neighbouring vicinity, do not underestimate the value this holds in appealing to Chinese investors – highlight it (as well as other amenities nearby)!

Chinese buyers are big on convenience and comforts, and what you may take as something inconsequential – such as a kindergarten – could make or break a successful sale for you.