With Chinese investors still the hottest and most sought after market globally, countries around the world are clamouring for their attention.

From one continent to another, the latest strategy that is proving to be a popular tactic is to revamp their visa policies and immigrant investment schemes.

Excitement swept over the world when President Obama announced an unprecedented visa policy change during his recent visit to China – a policy that now allows Chinese visitors to hold multiple-entry tourist and business visas into the US for up to 10 years, as well as a five-year visa extension for Chinese students in the US.1

For the US, it will benefit in terms of job creation, exports and economic growth. More importantly, this visa change is predicted to attract 7.5 million Chinese visitors to the US by 2021 – a feasible projection considering 1.8 million Chinese visited the US in 2013 alone.1

That is no loose change to scoff at – those 7.5 million projected Chinese visitors are expected to bring in an estimated $81 billion into the US economy.1

Additionally, this move will not only greatly boost investor confidence, but also propel property investment by Chinese buyers.

In fact, at Juwai.com, we foresee a 15% increase in Chinese investments in the US for 2015.2 However, Juwai.com Co-CEO Simon Henry tells the LA Times that it would be the new five-year student visa update, which will have a bigger impact on the economy.

Here are some fast facts on why:

Since the new visa policy came into effect on 12 November, we’ve seen a stunning 35% increase in enquiry on Juwai.com for US properties.6 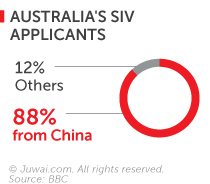 How would this impact Australia?

Since the inception of the current Significant Investor Visa (SIV) scheme in 2012, 88% of its approved visa applicants are from China, who will invest A$5 million over four years in exchange for residency. To date, A$2.18 billion have been invested in Australia.9

The new PIV, however, offers a 1-year accelerated pathway to permanent residency deal in exchange for A$15 million investment8 – an attractive alternative that looks set to lure even more wealthy foreign investors to migrate to Australia.

Once the PIV is launched in July 2015, though, while housing prices are not expected to soar in short term, it is highly likely that it will also further heat up the Australian property market – something that may trigger further debate amidst the rising concerns about Chinese buyers ramping up housing prices Down Under.

Even as the government is mulling over its foreign property investment rules, Juwai.com Co-CEO Simon Henry recently spoke to ABC News 24 to disprove such concerns.

Visa updates from other countries

In Europe, exciting changes have been proposed to the Golden Visa programme in Greece, which already has an attractive Golden Visa programme. Should the proposed new policy be approved, rich investor immigrants would be able to receive full Greek citizenship after seven years – granting full EU advantages to investors.10

Canada will soon be rolling out a new scheme to replace its suspended Federal Immigrant Investor Programme (IIP).

However, compared to the previous rules, the new scheme has been deemed as stringent. Set to launch next month, the new Immigrant Investor Venture Capital (IIVC) will accept only 50 wealthy migrants and their family each year as, and stiff qualifications have been put in place to ensure maximum impact on the Canadian economy. 11

Among some of the strict requirements include:

Although this is a step towards getting their programme back on track, it will not accommodate some 45,000 rich Chinese applicants previously on Canada's wait list, who will likely now be seeking alternative countries to migrate to – something property agents across the world should sit up and take notice of.