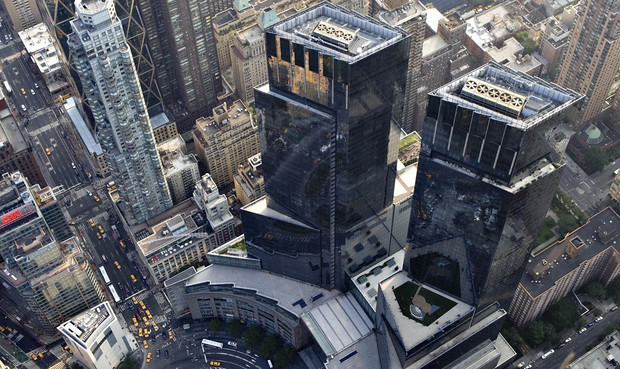 Chinaâ€™s oldest bank is expanding in New York lending for trophy buildings as Europeâ€™s debt crisis sweeps away the last wave of foreign financiers. David M. Levitt reports for Bloomberg. March 8, 2012 -- Bank of China Ltd. increased its loans outstanding on U.S. properties fivefold to $2.6 billion since 2008, with most of that growth in New York, according to Trepp LLC, a mortgage data provider. The bank agreed last month to refinance the Mandarin Oriental hotel in Columbus Circle owned by Dubaiâ€™s Istithmar World PJSC. The Beijing-based state-backed bank is making inroads after European lenders including Anglo Irish Bank Corp., pulled out of the market, Commerzbank AG (CBK)â€™s real-estate lending unit stopped competing, and Societe Generale (GLE) SA pared assets. Irish, German and French banks have led the retreat from the worldâ€™s most active commercial property market as regulators urge lenders to shrink their balance sheets to meet stricter capital standards at the same time Europeâ€™s debt crisis roils credit markets. Replacements, such as Bank of China, may benefit as New York property owners have to refinance more than $18 billion of commercial mortgages bundled into bonds in the next two years, according to data compiled by Bloomberg. â€œRight now, commercial real-estate lending is offering a good risk-adjusted return for lenders,â€ said Dan Fasulo, managing director at Real Capital Analytics Inc., which tracks commercial property sales worldwide. â€œThis should be a time where lending would help your balance sheet, versus government bonds, which are not paying anything.â€

Investor confidence in U.S. commercial real-estate debt is at the highest level since May amid signs the economy is improving, including an unemployment rate that declined to 8.3 percent in January from 10 percent in 2009. Relative yields on top-ranked commercial-mortgage bonds have narrowed 75 basis points this year to 186 basis points, or 1.86 percentage points, according to a Barclays Plc index. Bank of China, the countryâ€™s third-largest lender by assets, has accelerated its efforts in the U.S., with eight loans in the last year totaling almost $1.8 billion, according to data from Real Capital. Six were on New York properties, including a $260 million five-year loan on 3 Columbus Circle, a 768,565-square-foot tower (71,402-square meter) a block from Central Park owned by SL Green Realty Corp. (SLG) and the Moinian Group. The loan pays 2.1 percentage points above the London interbank offered rate, a lending benchmark, according to SL Green, the biggest owner of Manhattan skyscrapers.

â€œWeâ€™ve developed a very good relationship with the Bank of China,â€ said Isaac Zion, co-chief investment officer for SL Green. â€œWeâ€™ve done a few deals with them and hope to do more.â€ The bank last month agreed to lend $175 million to Istithmar Mandarin Oriental hotel. That repaid a $135 million obligation arranged in 2007 by Column Financial, the commercial mortgage lending unit of Credit Suisse Group AG, according to data compiled by Bloomberg. The Swiss bank said in October it was pulling out of originating commercial mortgages to be packaged into bonds. Bank of Chinaâ€™s New York-based first vice president, Raymond Qiao, who leads its U.S. mortgage lending program, declined to comment, as did Steven Vames, a spokesman for Credit Suisse. Moving in the other direction, Irish banks were forced from the market in 2009 when they were nationalized after real-estate losses globally.

Anglo Irish last year sold $9.65 billion of its U.S. real-estate loans to JPMorgan Chase & Co., Wells Fargo & Co. and Lone Star Funds for an average of about 80 cents on the dollar, two people familiar with the sale said in August. The Dublin-based lender, which financed the Upper West Sideâ€™s Apthorp apartment complex in 2007 for $360.7 million, was renamed Irish Bank Resolution Corp. and will be wound down over a decade. Eurohypo, the real-estate lending unit of Commerzbank, has placed a â€œtemporary embargo on new businessâ€ through June, according to an e-mailed statement from Gisela Brandhoff, a spokeswoman for the lender. Its loans to U.S. property owners have declined by $1 billion to $3.6 billion since the third quarter of 2009, according to Trepp. â€œIn line with Commerzbankâ€™s strategy to reduce Eurohypo assets globally, the bank is also seeking to reduce assets in the U.S.,â€ Brandhoff said in the statement. â€œThe European Banking Authorityâ€™s stricter capital requirements for banks marked a turning point for the financial sector and for us.â€ Basel III reforms being implemented are requiring banks to keep larger reserves against their more speculative investments, thereby forcing them to be more cautious in foreign markets, said Steve Collins, managing director of the international capital group at Jones Lang LaSalle Inc. (JLL), the worldâ€™s second-biggest publicly traded real estate brokerage.

Banks are also constrained because of concerns they may take losses should a European nation default, he said. Paris-based Societe Generaleâ€™s book of U.S. commercial mortgages has declined by 89 percent in the past two years, Trepp data show. Franceâ€™s second-largest bank agreed to sell $600 million of commercial property loans to Macquarie Group Ltd. (MQG) in November. James Galvin, a New York-based spokesman for Societe Generale, declined to comment. One European bank that hasnâ€™t cut back on its U.S. lending is Deutsche Bank AG (DBK), which was lead manager on $6.3 billion of loans marked for the commercial mortgage-backed securities market, beating J.P. Morgan for first place, according to rankings published Jan. 6 by Commercial Mortgage Alert, a trade newsletter. The Frankfurt-based bank in December agreed to a $625 million loan for Sheldon Solow on his 9 West 57th Street office tower, overlooking Central Park.

Those still in the market have to compete with insurers such as MetLife Inc. (MET) that have a cheaper cost of capital, said Collins. â€œThe life companies are crushingâ€ European banks, he said. â€œTheyâ€™re not seeking out new business, just maintaining the status quo.â€ Bank of China isnâ€™t the only lender from the region expanding in the U.S. Singaporeâ€™s United Overseas Bank Ltd. (UOB) increased its U.S. commercial lending to about $1.1 billion, a 178 percent jump over two years, Trepp data show. Zion of SL Green said the Singaporean firm is a â€œrelationship lenderâ€ interested only in specific high-quality buildings and borrowers. The bank paired with Wells Fargo to finance the acquisition of the Prada store at 724 Fifth Ave., the worldâ€™s most expensive shopping street, by an SL Green joint venture. The New York branch of Hong-Kong-based Bank of East Asia Ltd. (23) jumped to $1.1 billion of real estate loans outstanding, an 87 percent increase over two years. â€œChina, despite the global economic turmoil, is still running a significant surplus and has capital that needs to be put to work around the world,â€ said Fasulo. â€Itâ€™s actually opportunistic for the market to have them around. It softens the blow from the bunch of European lenders that left the market, and added depth to the Manhattan lending market.â€