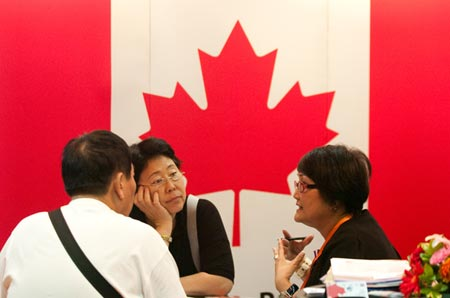 Visitors at a Canadian booth during a realty expo in Beijing. (Photo/Xinhua)

Wealthy Chinese people are causing housing prices in many cities around the world to shoot up, by accounting for 20-40% of the overseas investors in these cities, reports Shanghai's First Financial Daily. Want China Times reports. March 7, 2012 -- Chinese home buyers' investments have risen to 20-40% of the total among foreign buyers in Vancouver, Toronto, London and Singapore, all cities that are expected to remain favorites for Chinese buyers. In London, property prices in prime areas are expected to grow 5%-10%, driven by Chinese investments, according to Colliers International, a global partnership of independently owned commercial real estate firms. Nearly 20% of the buyers of new residential units in downtown London's high end were from China and Hong Kong, Colliers said. Over the past 20 years, prompted by the opening up of immigration policies, population growth in Canada has increased demand for property. This, in turn, has boosted the number of Chinese investors buying property here. Among them, Vancouver is the top choice for Chinese immigrants and students studying overseas. According to statistics, almost 20% of Vancouver's population identifies as ethnic Chinese. Canada's property prices have grown 10-15% in recent years. Singapore has also had a recent increase in mainland Chinese housing buyers, with nearly 30% of the buyers in the market coming from China. The proportion of Chinese home buyers in Hong Kong has also grown. Market experts say that China's overseas property market is still growing and that the trend will continue. However, although buyers of overseas properties have abundant capital and usually spend heavily, several factors needed to be considered while choosing properties and countries to invest in. Lai Kam-hung, an industry expert, said English-speaking countries are a top choice for Chinese investors. In addition to overseas study and immigration, growing property valuations are the main reason Chinese are buying real-estate, particularly after China introduced strict restrictions domestically on housing purchases and loans, dampening property prices. Alan Liu, the managing director of Colliers International for North Asia, said Chinese buyers are more concerned about immigration and lending than about property prices.