For sale: Australian homes with views to residency 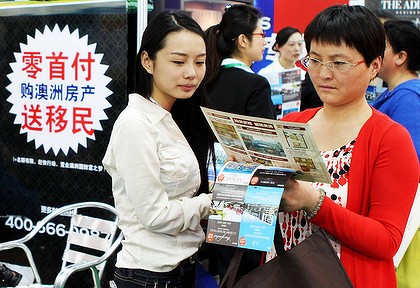 Chinese property investors are being lured with promise of migration to Australia. Photo: Sanghee Liu

Twice a year, one of Beijing's largest convention venues, perched on the same east-west thoroughfare as Tiananmen Square, holds a large-scale international property fair. The Sydney Morning Herald reports. April 10, 2012 -- Developers and agents spruik property from all over the world - the United States, United Kingdom and Singapore all have a large presence, as does Australia. Touts thrust leaflets into every open hand they can find. The drawcard, it seems, is more than property. One booth, which advertised property from all across the Australian east coast, prominently boasted: â€œInvest in property; speedy migrationâ€. Over at the Sunland Group's booth, a sign read: â€œBuy Australian real estate; free migration.â€ At the back of the hall, one US migration expert was busy convincing avid listeners that he had a close to 100 per cent record in helping his clients get a green card. â€œJust do what I say,â€ he said. The fair had also organised a delegation of Cypriot developers who spruiked the attractive proposition of residence in a member state of the European Union for 300,000 euros. Enterprising Chinese have been leaving home in search of a better life for centuries. But why, in one of the biggest and fastest-growing countries in the world, are Chinese leaving now? And why are the wealthiest of Chinese, who might earn multiples of the average wage, so keen to leave? â€œChinese have always taken money out of the country, but in the last two years the amount of money being taken out of the country has surged,â€ Michael Pettis, professor at Peking University and high-profile China bear, told BusinessDay. â€œYou have to ask yourself: why don't they believe the hype?â€ One theme that kept popping up was â€œsocial stabilityâ€. One prospective investor, who gave his last name as Wang, said Beijing property prices were too high and unstable, and that Australia offered a much more â€œsocially stableâ€ environment, and provided good opportunities for his 19-year-old son, who was studying mathematics at university. Mr Wang said he had an advertising business and had just begun plans to migrate. â€œIt shouldn't be too hard,â€ Mr Wang told BusinessDay. â€œI have a friend who has ten properties in Melbourne. I want to invest too. I hear the east is better but much more expensive.â€ In China, real estate as an investment has long been seen by the people to be safe as houses. That is, until last year. For the past five months in a row, property prices in China's major cities have steadily declined due to direct government action to curb real estate speculation amid growing concern of a property bubble. Yet still, particularly in China's larger cities, owning their own home remains well out of reach for average-wage earners. Even houses in Beijing's outer suburbs, more than an hour's commute away, are not cheap, even by Australian standards. Widening gap The growing disparity between the rich and poor in the world's most-populous nation has become glaringly obvious. The Chinese are making more money, but not feeling richer. Real wages are growing, but house affordability has plummeted. It all sounds a bit familiar, doesn't it? With the government restricting property purchases, the stockmarket still seen as overly risky, and bank interest below inflation, alternative â€œinvestmentsâ€ are flourishing. The price of top-end Chinese art, jade, tea, the obscure aphrodisiac dongchong xiachao, or caterpillar fungus, have all surged to record levels. It therefore makes sense that wealthy Chinese are increasingly looking at ways to make investments overseas. Our ever-increasing reliance on the Chinese economy extends to Australia's property market. A recent Standard and Poor's report said if China's economic growth rate dropped to 8 per cent, Australian property prices could drop 5 per cent. More alarmingly â€“ if less likely â€“ if China's growth rate dropped to 5 per cent, Australian property prices could plunge by more than 20 per cent. Naturally, gaining permanent residency in Australia is much harder than buying a few properties, a fact that many Chinese real estate agents gloss over. One migration and commercial law expert said he had many Chinese clients with migration in mind. â€œMany of them do ask about migration. But that's because of the unscrupulous agents,â€ he said. â€œArmed with properties in the Gold Coast, Brisbane, Sydney ... they're more like snake oil salesmen.â€ One Chinese agent explained: â€œYou need over $600,000 in Australian assets, and have a controlling share in a company for more than two years with a turnover of more than 2.4 million yuan (about $350,000).â€ It all sounded a bit too hard, one investor remarked. â€œWill you only consider Australia for migration? What about Canada?â€ came the reply.