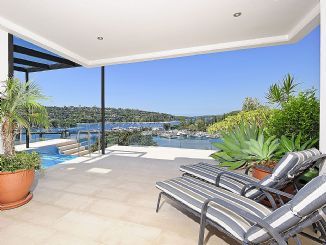 A waterfront prestige home in Seaforth Cres, Seaforth is fetching $5 million from an international investor.

Overseas investors have Seaforth in their sights, buying multi-million dollar property in key streets. No.48 Edgecliffe Esp sold this week to Chinese investors for $3.4 million, while No.7 Seaforth Cres is about to settle at $5 million to a Chinese family. Kathryn Welling reports for The Manly Daily. April 18, 2012 -- At the first open house on Saturday of 50 Peronne Ave, Clontarf, a Chinese buyer inspected and is showing keen interest around the high $2 million mark. The country’s largest apartment developer, Harry Triguboff, was reported this week saying that the current level of Chinese buying off-the-plan apartments in Sydney, Melbourne and Brisbane was unprecedented. However in Seaforth and Clontarf it seems both investors and Asian families looking to secure a good base for their children while they are educated in Sydney are driving prestige sales. Jason Guildea, of Raine and Horne Seaforth, who just sold 48 Edgecliffe Esp, said there were half a dozen groups of Chinese buyers scouring premium property in the area at the moment. “They are picking up great buys while the locals miss out,” he said. David Rothschild, of LJ Hooker Seaforth, sold 7 Seaforth Cres to a Shanghai hotel owner whose son went to school in Dee Why and then attended university. “There has been a trickle of Asian buyers for some time but more recently we have been seeing more straight investors ... they are looking at the fringe of Sydney where they see good capital growth over the next three to five years,” he said. “I have been dealing with a clothing manufacturer from Shanghai who, over three weeks, bought a $6.2 million site in Crows Nest and a $4.2 million property in North Sydney.” Glen Wirth, of Richardson and Wrench Seaforth, said in a country where a new millionaire is made every day there are many cashed up business people keen to invest beyond China’s shores: “They want good access to transport as often the lady of the house doesn’t drive, they prefer level land and they prefer something that is renovated rather than having to negotiate with tradesmen in a language they can’t speak.” Mr Wirth sold 37 Edgecliffe Esp last year to a Chinese owner of a construction company who comes out each year to buy Sydney property between $2 million and $5 million. “He already owns six or seven properties in Sydney that he rents out,” he said. BIG SALES > Edgecliffe Esplanade sold to Chinese investors for $3.4 million. > 7 Seaforth Cres is about to settle at $5 million to a Chinese family. > 50 Peronne Ave, Clontarf was open on Saturday and a Chinese buyer is showing keen interest around the high $2 million mark.