By Juwai, 15 April 2012
Over five days in January, a group of visitors to New York was treated to a private concert with the pianist Lang Lang at the Montblanc store, cocktails and a fashion show attended by the designers Oscar de la Renta and Diane Von Furstenberg, and a tour of EstÃ©e Lauderâ€™s original office. They were not celebrities. They were not government officials. They were Chinese tourists with a lot of money. Stephanie Clifford reports for The New York Times. 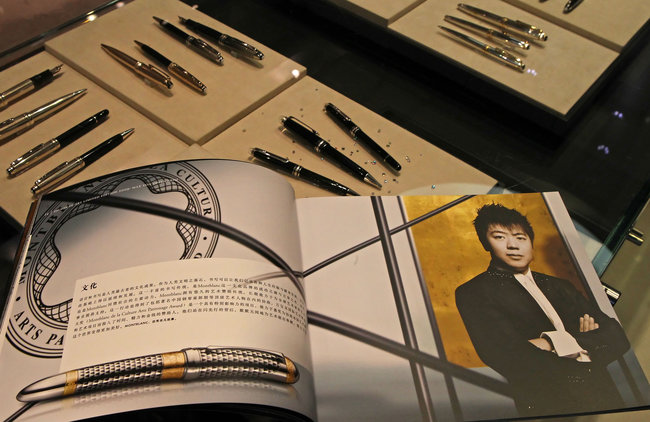 The pianist Lang Lang in a Mont Blanc catalog, which is available in Chinese language.

April 14, 2012 -- Though luxury brands started opening stores in Beijing and Shanghai years ago, Chinese shoppers still spend more on luxury products abroad than they do at home, according to the consulting firm Frost & Sullivan. Price is the major reason: Because of Chinaâ€™s taxes, luxury products are about a third cheaper in the United States and elsewhere. European luxury stores have been catering to Chinese tourists for years. Now high-end retailers in the United States are pulling out their Mandarin phrase books and trying to convince Chinese visitors that Americans can do luxury, too. â€œWhat started as a trickle has now become a flow,â€ said the vice president of the antiques store Macklowe Gallery, Ben Macklowe, who recently sold a Tiffany lamp that cost in the low six figures to a Shanghai visitor. â€œThereâ€™s been prosperity across so much of Asia that youâ€™re starting to see it much more in the profile of the tourist on Madison Avenue.â€ A record number of Chinese visited the United States last year â€” nearly 1.1 million â€” and the country accounts for one of the top-growing tourist groups here, according to the Commerce Department. The number of visitors is expected to almost double by 2014, according to the U.S. Travel Association. Chinese visitors spend about $6,000 each on every visit here, versus the $4,000 that visitors from other countries spend on average, the association says, and their top activity is shopping. Although some tourists spend money on Disney trinkets and at the outlet malls they have traditionally frequented, luxury brand purchases are surging in part because American stores carry a broader range of products than their counterparts in China, said Julia Zhu, consulting director for Frost & Sullivan. Tiffany, which made almost a quarter of its United States revenue last year from foreign tourists, has added Mandarin-speaking sales staff to its major stores, as has Burberry, where more than half of sales at its flagship stores are to tourists. Representatives from Tourneauâ€™s Manhattan office recently accompanied New York City officials on a visit to China to encourage more tourism in the city. At its United States stores, Montblanc sells Year of the Dragon pens and has staff members who speak Mandarin and Cantonese. It is also printing Chinese-language brochures about its products and selling wallets sized for Chinese currency. Despite having more than 100 stores in China, Montblanc is going after Chinese shoppers on vacation abroad. â€œYes, we are in the major cities, but when you travel, youâ€™re in the mood to enjoy and experience the moment,â€ said Jan-Patrick Schmitz, chief executive of Montblanc North America. â€œWe certainly will do more and more marketing toward them.â€ Retailers in the United States lag behind other countries. Part of that is because of visa issues; it is easier for Chinese residents to get visas to Europe. High-end American retailers like Saks Fifth Avenue and Bloomingdaleâ€™s are urging the government to speed up the process here. President Obama said in January that he planned to increase visa-processing capacity from emerging markets like China and Brazil by 40 percent this year. The American stores also have to overcome an idea that luxury can come only from the old world. â€œThe European brands, they see prestige, history, heritage,â€ said Sunny Wong, group managing director of Trinity, a company that owns and operates high-end European retail brands in China. American brands, by contrast, are seen as â€œcontemporary, lifestyleâ€ rather than pure luxury, he said. American retailers are racing to prove Mr. Wong wrong. 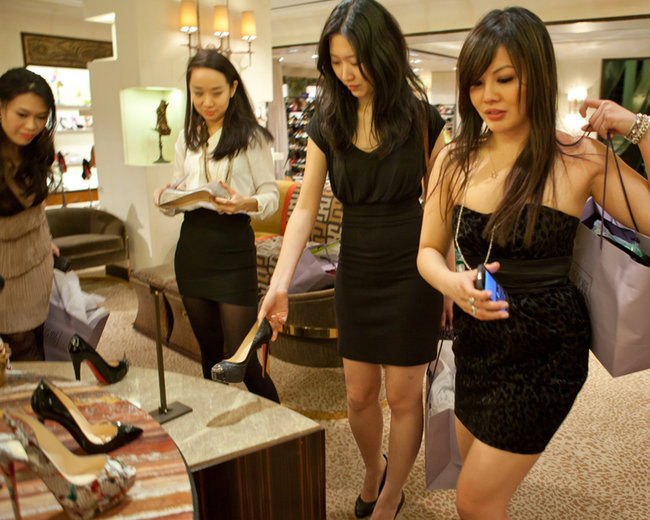 Chinese visitors during an after-hours tour of Bergdorf Goodman, which brought in Mandarin-speaking assistants for an event.

Bergdorf Goodman in January held a private runway show at its Fifth Avenue store for a group of Chinese tourists, followed by a meet-and-mingle with designers like Mr. De la Renta, Peter Som and Zac Posen. Then, with Bergdorfâ€™s fashion director looking on, Mandarin-speaking assistants helped the Chinese customers shop throughout the store. â€œThere are lots of brands that are already very well-known in China, but Bergdorfâ€™s strongest footprint is in New York, so getting them to know that brand when they come here is a very important goal for us,â€ said Chris Noble, president of Affinity China, a luxury travel operator that organized the event. Affinity China also arranged a meeting with Aerin Lauder, a granddaughter of EstÃ©e, and a tour of J. Mendel, the fur brand, with a designer and one of the Mendels. â€œThey took them backstage, and showed how materials are selected and how the pieces come together, and showed them the craft,â€ Mr. Noble said. â€œWeâ€™ve got a lot of interest in the craftsmanship behind the luxury pieces. People like to be able to say, â€˜I saw how this was made, I met the designer.â€™ â€ Mr. Macklowe, the gallery executive, recently held a seminar with Champagne and chocolate for Chinese tour operators. â€œYou have to tailor your message for the crowd, and for this crowd it was, â€˜These are very exclusive things, these are very authentic things, these are very high-end things that you can recommend to your clients without reservation,â€™ â€ he said. â€œWe tried to give them a sense that what we do only exists in one place on earth.â€