By Juwai, 30 June 2012
Brazil and China announce a slew of new trade and finance deals. Week in China reports. 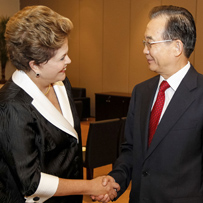