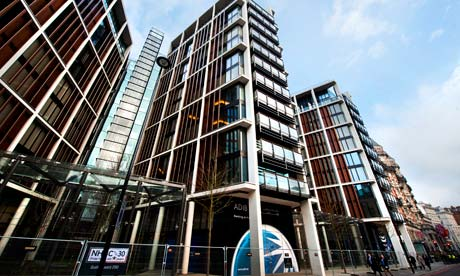 Flats in One Hyde Park, London. If the BGC's wealth report included property, the UK would have many more millionaires listed. Photograph: Linda Nylind/Guardian

May 31, 2012 -- The eurozone plunged into crisis and unemployment soared across the globe, but 175,000 people still made enough cash last year to join the global millionaires' club. The new entrants, mostly from China and India, bring the number of millionaire households across the world to 12.6m, according to a global wealth report by Boston Consulting Group [BCG]. The US still boasts the most millionaires with 5.13m households in the top bracket, despite a fall of 129,000. China, which added 193,000 to 1.4m, is within touching distance of Japan, which is in second place with 1.58m. Britain is in fourth place with 411,000 millionaires. The influx of oligarchs and other wealthy foreigners enabled the UK to boast the second highest number of "ultra high net worth" [UHNW] individuals, with 1,125 households holding financial assets in excess of $100m (Â£65m). 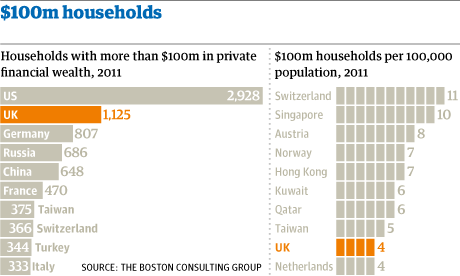 Households with a net worth of over $100m. Graphic: Paul Scruton

One in 25,000 UK households is now worth more than $100m, says BCG's report, which does not include property and other non-financial assets. If property were included, the number of UK millionaire and super-millionaire households would dramatically increase. Anna Zakrzewski, one of the report's authors, said: "You have the oligarchs and also a lot of ultra high net worth families relocating to the UK from Middle East India, east Europe." In Singapore 17.1% of all households are worth more than $1m, while 11 out of 100,000 households in Switzerland are worth $100m or more. Zakrzewski said the world is in the midst of a "tectonic shift" that will see Asia overtake Europe in terms of total wealth within five years. "The new world economies have grown by 10%, while the old world lost 1%," she said. "The key drivers are the humongous GDP growth [in fast-developing countries], which is three times that in the old world; lots of exports; and a lot higher investment in Asia." She predicted China will be the third richest nation in terms of private wealth within five years, and India will jump to seventh. "China's number of millionaires should continue to grow strongly, driven by the large number of initial public offerings expected in the country as well as by new wealth generated by entrepreneurs," the report said. The world's richest people are also getting richer faster than everyone else. While the world's total privately held wealth increased by 1.8% to $122.8tn last year, UHNWs' wealth increased by 3.6% to $7.1tn. The report predicts that UNHWs' wealth will rise to $10.3m, or 6.8% of the world's total wealth, by 2016. The amount of money held offshore, which often attracts a much lower tax rate, increased by 2.7% to $7.8tn. "The increase was driven partly by a flight to safe havens by investors in politically unstable countries, and partly by inflows from UHNW families based in rapidly developing economies. "Still, offshore wealth management as an industry remains under intense and increasing pressure owing to greater regulatory scrutiny â€“ particularly from tax authorities in the United States and western Europe," the report said.