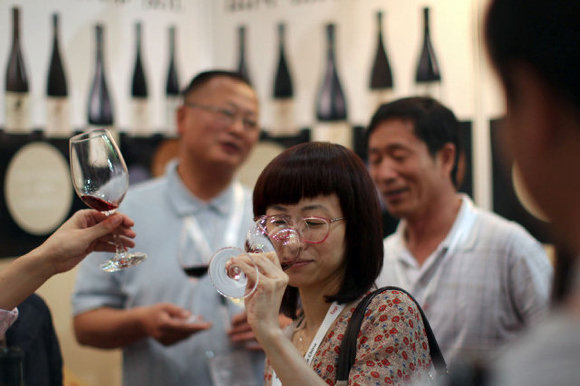 With bottles ready for tasting, a group of Lodi wine producers waited anxiously last week for a delegation of monied business people they hoped to impress. The vintners burst into applause when the group finally arrived, over an hour late. Chris Macias reports for McClatchy Newspapers. June 14, 2012 -- These honored guests werenâ€™t Hollywood moguls or Silicon Valley venture capitalists. They were potential customers and investors from the city of Shenyang in northern China, coming to check out Lodi as a potential source of affordable wine to supply Chinaâ€™s rapidly growing market. The rising middle class in China and other Asian-Pacific countries is fueling one of the wine worldâ€™s fastest growing markets. According to the McKinsey Global Institute, China is expected to add 235 million consumers by 2020 and will account for 20 percent of the global luxury market by 2015. U.S wineries exported $62 million of wine to China in 2011, a 42 percent increase from 2010, according to the Wine Institute, an advocacy group for Californiaâ€™s $61.5 billion wine industry. Exports to Hong Kong jumped by 39 percent in the same period, to $163 million. Those numbers â€“ while small compared to the total market â€“ have grabbed the attention of wineries looking for alternatives to the cutthroat competition of U.S. wine sales. California wine comprises 90 percent of U.S. exports. â€œIf you structure the deal correctly, itâ€™s both safer and more profitable to sell to China than it is to sell domestically,â€ said Frank Gayaldo, director of international development for the Lodi District Chamber of Commerce, and organizer of last weekâ€™s tasting. â€œImports are eating up roughly 20 percent of our domestic (wine) market, and itâ€™s difficult for small wineries to get good distribution contracts.â€ One Lodi winery at the tasting already sells more wine in China than in the United States. Benson Ferry Vineyards has shipped wine to China since 2007, mostly to Beijing. It exported 2,000 cases of pinot grigio and 4,000 cases of merlot in May. â€œThereâ€™s over 80 wineries in Lodi, and weâ€™re just one,â€ said Wendy Stokes, who oversees sales and marketing for Benson Ferry. â€œRight now, Chinaâ€™s an open market, and weâ€™re looking to expand in all parts.â€ Along with a growing taste for designer clothes and high-end watches, China and other Asian nations are deepening their thirst for wine. At first, Chinese consumers were interested mostly in elite California brands and highly coveted â€œfirst growthâ€ French wines, such as Chateau Petrus and Chateau Lafite Rothschild, which sell for thousands of dollars per bottle. Now, a softening Asian economy has led to more interest in value-friendly California brands, such as those from Lodi. â€œTheyâ€™re looking at Lodi and even Napa for bottles in the $20-to-$30 range that are tasting good,â€ said Turino Fuad of VINX International Inc., a Gold River, Calif., wine brokerage. France still leads other countries for wine exports to China, followed by Australia and Chile. Market share for the United States remains small, about 5 percent, said Rex Zhang of the U.S. Agricultural Trade Office in Shenyang, who accompanied the Chinese delegation last week. â€œIn my area, itâ€™s even lower,â€ Zhang said of Shenyang. â€œAmericans consume about 80 percent of their total production, and havenâ€™t had to depend on the overseas market that much. Now theyâ€™re seeing big potential in China.â€ The Wine Institute has targeted China with an ad campaign that joins the words â€œDiscover California Winesâ€ with images of the Golden Gate Bridge. The Chinese arenâ€™t interested only in buying California wine. Increasingly, theyâ€™re also looking to buy the wineries and vineyards themselves. The high-end Sloan Estate Winery, which offers some bottles for upwards of $600, sold its property to a Hong Kong conglomerate in 2011 for $40 million.