By Juwai, 06 July 2012
U.S. wineries exported $62 million of wine to China in 2011, a 42% increase from 2010, and most of it came from California. China is a small but rapidly growing market for the state's wineries. Chris Macias reports for Los Angeles Times. 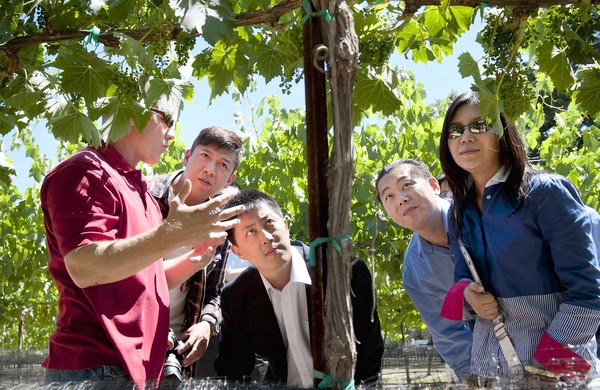 July 5, 2012 -- LODI, Calif. â€” With bottles ready for tasting, a group of Lodi wine producers waited anxiously recently for a delegation of monied businesspeople they hoped to impress. The vintners burst into applause when the group finally arrived, more than an hour late. The guests weren't Hollywood moguls or Silicon Valley venture capitalists. They were potential customers and investors from the city of Shenyang in northern China, coming to check out Lodi as a potential source of affordable wine to supply China's rapidly growing market. The rising middle class in China and other Asian-Pacific countries is one of the wine world's fastest-growing markets. According to the McKinsey Global Institute, China is expected to add 235 million consumers by 2020 and will account for 20% of the global luxury market by 2015. U.S. wineries exported $62 million of wine to China in 2011, a 42% increase from 2010, according to the Wine Institute, an advocacy group for California's $61.5-billion wine industry. Exports to Hong Kong jumped 39% in the same period, to $163 million. Those numbers â€” while small compared with the total market â€” have grabbed the attention of wineries looking for alternatives to the cutthroat competition of U.S. wine sales. California wine accounts for 90% of U.S. exports. "If you structure the deal correctly, it's both safer and more profitable to sell to China than it is to sell domestically," said Frank Gayaldo, director of international development for the Lodi Chamber of Commerce and organizer of the tasting. "Imports are eating up roughly 20% of our domestic [wine] market, and it's difficult for small wineries to get good distribution contracts." One Lodi winery at the tasting already sells more wine in China than in the United States. Benson Ferry Vineyards has shipped wine to China since 2007, mostly to Beijing. It exported 2,000 cases of Pinot Grigio and 4,000 cases of Merlot in May. "There's over 80 wineries in Lodi, and we're just one," said Wendy Stokes, who oversees sales and marketing for Benson Ferry. "Right now, China's an open market, and we're looking to expand in all parts." Along with a having growing taste for designer clothes and high-end watches, China and other Asian nations are deepening their thirst for wine. At first, Chinese consumers were interested mostly in elite California brands and highly coveted "first growth" French wines, such as Chateau Petrus and Chateau Lafite Rothschild, which sell for thousands of dollars per bottle. Now, a softening Asian economy has led to more interest in value-friendly California brands, such as those from Lodi. "They're looking at Lodi and even Napa for bottles in the $20-to-$30 range that are tasting good," said Turino Fuad of VINX International Inc., a Gold River, Calif., wine brokerage. "As brokers, we continue to educate our partners about where wines are coming from. China's learning the market faster than we think." France still leads other countries for wine exports to China, followed by Australia and Chile. Market share for the United States remains small, about 5%, said Rex Zhang of the U.S. Agricultural Trade Office in Shenyang, who accompanied the Chinese delegation last week. "In my area, it's even lower," Zhang said of Shenyang. "Americans consume about 80% of their total production and haven't had to depend on the overseas market that much. Now they're seeing big potential in China." Other members of the delegation included Yuan Tuo, a sales manager for Shenyang Wine Fairy Tales Trade Co., and representatives from Shenyang Jiatong Trade Co. In addition to a morning tasting near downtown Lodi, the delegation toured Sorelle Winery on California 88, Omega Vineyards & Winery and Oak Ridge Winery. "At the beginning we knew California, then we knew Napa and now Lodi," said David Hua of the Dalian Wine Assn., who acted as a consultant for the delegation. "I enjoy [Lodi wines], but they're a little different. It's a little sweet, but easy to drink." California wineries are selling more of their product to other Asian countries as well. U.S. exports to Japan rose 39% in 2011, to $105 million. Sales to Vietnam jumped 266%, to $21 million. Exchanges between Lodi wineries and Chinese business delegates started in 2008. The Wine Institute has also organized trade missions to China with California vintners for 12 years, including a California delegation to Hong Kong in May representing 250 wine brands. The Wine Institute has targeted China with an ad campaign that joins the words "Discover California Wines" with images of the Golden Gate Bridge. The Chinese aren't interested only in buying California wine. Increasingly, they're also looking to buy the wineries and vineyards themselves. The high-end Sloan Estate Winery, which offers some bottles for upward of $600, sold its property to a Hong Kong conglomerate in 2011 for $40 million. Also last year, Zhang Winery of China bought Napa's Frazier Winery out of bankruptcy. Other countries have also invested in Napa wineries. The Australian Foster's Brewing Group paid more than $1 billion for Beringer Wine Estates of California in 2000, and Stag's Leap Wine Cellars sold for $185 million in 2007 to a partnership that included Italian vintner Piero Antinori. Kenzo Tsujimoto, a Japanese video game magnate, invested $100 million in his high-end Kenzo Estate winery. Lodi and other parts of the Sacramento area's wine region are also ripe for foreign investment. Gayaldo recently met with an investor from Shanghai who was interested in purchasing a Lodi winery. "I've received a couple of inquiries where companies are looking for a workhorse winery that can produce ultra-premium wine at medium prices, and nobody can do that better than Lodi," Gayaldo said. Although the Lodi exchange wasn't specifically for scouting vineyards, Zhang said that some Chinese investors are eyeing such investments. "Now that the economy in China is slowing down, [businesspeople] don't want their money to depreciate and some want to move their money to other industries," Zhang said. "After tasting, they feel the U.S. has very good wine. They're really impressed and think here is some proper vineyards and maybe I can invest in that."