China pledges $20bn in credit for Africa at summit

China has pledged $20bn (Â£12.8bn) in credit for Africa over the next three years, in a push for closer ties and increased trade. BBC reports. 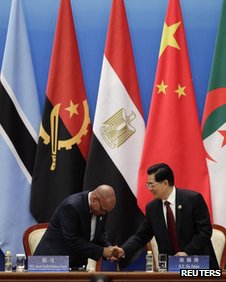 July 19, 2012 -- President Hu Jintao made the announcement at a summit in Beijing with leaders from 50 African nations. He said the loans would support infrastructure, agriculture and the development of small businesses. The Chinese leader also called for better co-operation with African countries on international affairs. As developing nations, China and countries in Africa should work better together in response to "the big bullying the small, the strong domineering over the weak and the rich oppressing the poor" in international affairs, said Mr Hu. The loan is double the amount China pledged in a previous three-year period in 2009, since which time China has been Africa's largest trading partner. Trade between the two hit a record high of $166bn (Â£106bn) in 2011, Chinese Commerce Minister Chen Deming wrote in the China Daily newspaper, ahead of the two-day forum. "We want to continue to enhance our traditional friendship... rule out external interference and enhance mutual understanding and trust," said Mr Hu. United Nations Secretary General Ban Ki-moon is also attending the fifth ministerial meeting of the Forum on China-Africa Co-operation. 'Balanced development' On Wednesday, Mr Hu and Premier Wen Jiabao held bilateral talks with key African leaders, including South African President Jacob Zuma. 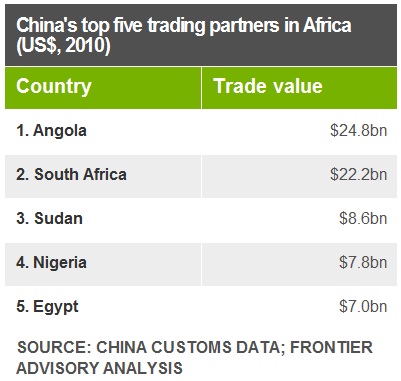 Africa is an important source of raw materials to feed China's economic boom and a market for cheap Chinese products, and has benefited from huge infrastructure projects in return, says the BBC's Damian Grammaticas.

But there are concerns Beijing turns a blind eye to corruption and claims its firms have committed labour abuses in Zimbabwe, Zambia and elsewhere, our correspondent adds. Moves by some Chinese enterprises to hire mostly Chinese nationals have also drawn attention. Mr Wen said that China would now focus on creating jobs for local residents and working with African countries for sustainable growth. At an economic conference held in conjunction with the summit on Wednesday, he said China would ''expand imports'' of African products and ''further open'' its domestic market to African countries. ''We need to promote balanced development of trade between China and Africa,'' he said. He also pledged that China would pay more attention to environmental protection and cultural issues in its dealings with the continent. ''As for some existing problems and new situations in China-Africa co-operation, the Chinese government is actively working with African countries to seek effective solutions and measures,'' Mr Wen said.