Market Update: In Australia, Sydney edges out rivals in battle for Chinese investment 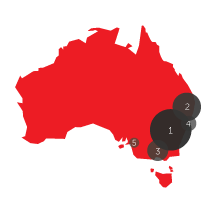 Now and then, Juwai.com likes to give you an outlook for Chinese investment in various parts of the world.

Today's Market Outlook focuses on Australia. For Australians, the big question is: Sydney or Melbourne?

Which of the famously rival cities come out on top?

Well, Melbourne has many fine qualities, and is indeed a top destination for Chinese property investors. It competes competitively with other cities around the globe, and not just in Australia.

However, when met with its most important rival, Melbourne loses out on the metric of Chinese investor interest. It get's worse â€“ Melbourne is also surpassed by Brisbane, another city on Australia's East Coast.

Source: As measured by activity on Juwai.com, January to August 2013, including page views, searches, search results and enquiries.

Brisbane is the capital of the state of Queensland, where investors from China are the No. 1 foreign property buyers. Chinese buy so much Queensland property that the local newspaper recently ran a story titled, "The Great Haul of China."

Even so, some Sydney real estate agents aren't convinced. "Melbourne's a great place to visit but I wouldn't want to live there and I think the Chinese feel the same way," says Stephen Patrick, principal of Richardson & Wrench in Sydney's prestigious Mosman suburb, in a conversation with the Sydney Morning Herald.

However, real estate agents in Melbourne don't give an inch of ground in this battle.

Melbourne agent Tim Fletcher, principal of Fletchers, told the paper that Chinese investors prefer his city's better lifestyle. "This isn't a Sydney-Melbourne thing. It's what I hear from them. We've got a more relaxed lifestyle," he said.

"Sydney has remained the clear top destination for Chinese investor interest for most of 2013," said Juwai.com co-CEO, Simon Henry. "While Melbourne has shown the greatest volume growth this year and is the year's top trender so far, it hasn't been enough to bypass Sydney or Brisbane as number one and two over all."

One reason Chinese buyers like Sydney is for its water views.

Melbourne has a lot to be desired from the Chinese perspective. It's a true urban environment, which is very familiar to Chinese buyers, but with fantastic parks and amenities that give the city its attractive lifestyle. As for the product, buyers have their choice of a large number of new developments, as well as freestanding homes.

Australian vendors, or home sellers, like Chinese buyers because they often pay cash. Research from the US shows that Chinese pay cash 70% of the time.

At a recent property auction in Australia, there were six bidders. Five of them were Asian, including four who were Chinese.

"The basic picture is one of rapid growth everywhere, with Melbourne leading the pack in terms of growth, just not as the top destination this year," said Juwai.com's Henry.

Australia in the Asian century