Did you know? The Mandarin language, or Putonghua in China, literally translates to “Common Speech”.

This is because Chinese is actually a macrolanguage. It includes many languages and a vast mishmash of dialects, such as Yue (Cantonese), Hakka, Min (Hokkien), Gan, Xiang, Wu, and more.1

The roots of the Putonghua 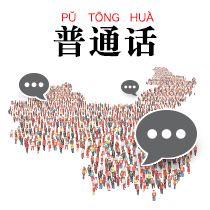 Originally based on the Beijing dialect, Mandarin was first established as the official language of the Yuan dynasty’s government and administration six centuries ago.2

Known as Guanhua back then, Mandarin was essential for those who aspired to be an official or sought business with the imperial court.2

Today, Mandarin – officially known as Modern Standard Chinese – is the national bridge language of China and widely used intelligibly by most Chinese people. Strong regional accents still prevail, though, which helps pinpoint the origins of the Chinese speaker.

Interestingly, though subtle, it can also sometimes differentiate a Chinese speaker’s nationality depending on how they refer to it. Here are three other ways Mandarin is commonly referred to in different parts of the world:

Mandarin, the language of tomorrow

With nearly 1.2 billion speakers around the world1 – and the growing fact that China may soon become the world's largest economy – Mandarin seems set to be a new lingua franca of the future – a language or dialect systematically used to make communication possible between people who do not share a native language or dialect.

In 2011, Bloomberg reported Mandarin as the #2 most useful business language after English.3

While learning Mandarin is daunting, with it's reputation as one of the most complicated language in the world, its benefits are immense.

Being able to speak Mandarin offers a world of advantage for those seeking to do business in China – enabling them to further deepen their 'guanxi' with Chinese clients and conduct negotiations with a degree of flexibility, knowledge, and sophistication that would never be achieved with a language barrier.

Even as far back as 2013, British Prime Minister David Cameron was already a staunch advocate of the language, urging UK youths to focus on mastering China's official tongue over the traditional French and German languages after his three-day visit to China.4

According to Cameron, this is because he wants Britain to be linked up with the world's fast-growing economies, and achieving this requires the younger generation to begin learning ‘the languages to seal tomorrow's business deals.’

“By the time the children born today leave school, China is set to be the world's largest economy. So it's time to look beyond the traditional focus on French and German and get many more children learning Mandarin," said Cameron.4

In the US, President Barack Obama’s daughter Sasha is also learning Mandarin.5 Some schools, such as the Arizona Language Preparatory in Northeast Phoenix, are already teaching Mandarin to their students alongside English and Spanish to great success – the students’ state testing scores exceeded the average.6

In fact, even some far-flung countries, such as South Africa, are ramping up Mandarin proficiency levels – Angie Motshekga, Basic Education Minister of South Africa, recently announced a plan to have 500 schools offer Mandarin as a second additional language in the next five years.7

No Mandarin? Let us do the talking

So most probably agree that learning Mandarin is a valuable investment. That said, even if you don’t speak Mandarin, you can still be successful with Chinese buyers.

After all, Mandarin is a difficult language, and some may not have the time to devote to it. So If you want to reach Chinese buyers now, without mastering Mandarin, our advice is to take baby steps – learn some basics.

Simple greetings are a good start, like how to introduce yourself. You could also pick a Chinese name, which will help Chinese buyers remember you better.

And if you’re worried your pronunciation would be terrible, don’t. Any attempt to speak Chinese will be well received. In fact, your effort to learn their language will be much appreciated, and may even break the ice to bolster their comfort level with you as their preferred agent.

As for the other nitty-gritty details, like translating your listings to Chinese or advertising via Chinese advertorials and Email Direct Marketing (EDMs), we’re more than happy to help you.

Find out more about Juwai products with language support here.