By 2020, 150 million Chinese are expected to travel to the Asia-Pacific region.1

That’s a 47% jump from the 102 million Chinese travellers who visited the region in 2015, and these additional 48,000,000 Chinese visitors are projected to spend a whopping $230 billion on their travels.1

Something huge is afoot in Asia, and based on recent trends that add substance to these forecasts, it will be Southeast Asian countries that will be reaping the benefits as they continue seeing spectacular growth in visitor arrivals from mainland China.

Total arrivals from China to Singapore, Thailand, Malaysia, Indonesia, the Philippines, Cambodia, and Myanmar grew 33% to reach a total of 14 million arrivals in 2015.

More importantly, the strong performance and excellent growth prospects in Southeast Asia is leading smart businesses and industry leaders to position themselves to cash in on this fast-growing demand from China.

Take Asia’s largest budget airline AirAsia as an example. AirAsia recently announced a US$12.6-billion investment in a whole new fleet to help it carve out a share of the China market – Asia’s increasingly lucrative air travel market2, which Boeing estimates will grow to the world’s largest passenger market by 2034.3

Considering overseas travel underpins Chinese international property investment, agents and developers from across Southeast Asia are already jockeying to position themselves strategically in order to market their properties to Chinese buyers.

We share 5 factors behind the escalating Chinese buyer interest in Southeast Asia below:

Seeing as Thailand is one of the most popular holiday destinations for Chinese, Ancha Property has stepped up to actively market their properties all over Thailand – especially top cities like Bangkok, Pattaya, and Phuket – online to cater to strong demand from Chinese buyers.

Thailand was the fourth most enquired investment destination for Chinese buyers on Juwai.com in Q2 2016.

This move by Ancha Property is extremely timely, because Thailand is most popular with Chinese property hunters seeking lifestyle, holiday, and retirement properties.

Country Garden, one of China’s largest developers, is also a prime example of developers trying to ride the tide of the surging Chinese outbound travellers. Its Forest City project is based in the Johor state of Malaysia – the #11 most popular investment destination for Chinese buyers on Juwai.com – and Country Garden has been aggressively promoting this project in China.4

What's more, considering Johor is right across from Singapore â€“ yet another favourite travel destination for Chinese â€“ it would seem that Country Garden is killing two birds with one stone, with Forest City strategically poised to appeal to Chinese buyers interested in Malaysia or Singapore. 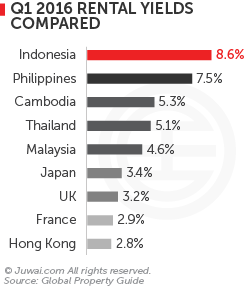 With Indonesia offering rental yields as high as 8.6% or 7.5% in the Philippines – as compared to major global investment hotsposts, such as 2.9% in France or 3.2% in the UK – it doesn't take a scientist to figure out which investment destination will give you bang for the buck.5

In other words, investing in property in Southeast Asia looks like a great bet from a yield perspective, and cash-rich Chinese know this.

Fired by high investment returns and the prospect of strong growth in the area in the coming years, China’s high net worth individuals (HNWIs) are flocking to the Southeast Asia region.

In fact, Oxford Economics forecasts GDP growth in the Southeast Asia region of 4.5% in 2016 and 4.8% in 20176, compared with IMF estimates of 3.1% and 3.4% for the world economy7, and this trend â€“ along with its location slap bang in the middle of a vibrant Southeast Asia region, plus its low taxes and excellent transport links â€“ has made Singapore the unofficial HNWI capital of Southeast Asia, pushing it to third place in Knight Frank’s ranking of the most important global cities for HNWIs.8

More importantly, the growing China's HNWI population has firmly set their sights on Southeast Asia, and this should further stimulate and bolster Chinese property demand in Southeast Asia, as Knight Frank estimates Chinese HNWIs to allocate 24% of their wealth to real estate investment.8

China is estimated to have a population of 240 million citizens over the age of 60 by 2020, according to the Brookings Institute.9

While industrialist might baulk at China’s ageing population, it makes for huge potential market for real estate agents abroad.

Clearly, this development has the potential to drive demand for retirement homes throughout the Southeast Asia region, which is well-favoured by older Chinese generation and retirees as a retirement home or holiday getaway for its attractive climate, growing transport links, easier visa policies, and large Chinese diaspora.

Additionally, the relatively low cost of living and first-rate healthcare options in Southeast Asia are a major draw for China’s rapidly-ageing population, especially for Chinese HNWIs who are growing increasingly aware and concerned about healthcare and retirement planning in recent years.10

For comparison, ECA international ranks Beijing and Shanghai as the 18th and 20th most expensive places to live in the world, while Bangkok and Kuala Lumpur rank much lower in 172nd and 194th places, respectively, in terms of cost of living.11

With already world-class health services offered in places like Bangkok, Kuala Lumpur, and Singapore, the case for settling in Southeast Asia just gets stronger and stronger.

50% of China’s HNWIs said healthcare was their main interest in 2016 – 46% who prefer overseas treatment, and 47% who would opt for overseas physical examination.10

Besides that, Southeast Asian countries are all relatively close to China, which is definitely a plus point should these Chinese retirees desire to make a trip back to China either for family visits or other reasons.

What’s worth noting is that the breadth of the Chinese market and their interest in Southeast Asia expands beyond the upper echelons of China’s super-rich. That’s because it’s getting easier than ever for Chinese buyers and travellers to gain access to Southeast Asia today.

Not only has major Southeast Asian countries – Singapore, Thailand, Malaysia, Indonesia, the Philippines, and Cambodia – eased visa policies for Chinese travellers in recent years, but operators are also putting links across land, air, and sea, putting Southeast Asia at the doorstep of mainland Chinese.

Case in point: China is known for a penchant for train travel, and companies and governments across the region are capitalising on this with ambitious plans to connect the continent by rail.

Airborne expansion is taking shape too, with the growth of flight routes making an overseas property investment in Southeast Asia even more feasible. For example, AirAsia has grown its selection of cities served from an initial presence in Shanghai five years ago to fifteen hub cities currently, including fast-growing second- and third-tier cities such as Nanchang, Wuhan, and Chongqing.13

New routes and competition have made flights affordable as well. Return flights for the 2,889km trip from Shanghai to Bangkok on China travel portal Qunar can now be as low as Â¥1,341 (US$201), which compares starkly with the Â¥1,866 (US$281) needed for a two-way first-class domestic trip on high-speed rail between Shanghai and Beijing.14

Besides train and flights, the growing cruise market is another hot sector being driven by Chinese demand, and mainland companies are leveraging this rising popularity of cruises to Southeast Asia by adding more routes and building more ships.

Although few hate to admit it, it’s every traveller’s guilty pleasure to enjoy a few reminders of home when overseas, and Chinese are no exception.

For Chinese travellers and migrants – especially for the very young and the elderly – the huge diaspora of overseas Chinese communities throughout Southeast Asia offers home comforts through a sense of community and cuisine, which makes them feel at home while away from China.

In fact, the power of the Chinese diaspora is one of the main reasons Chinese property investors have a partiality for places like California, thanks to its large and well-established communities of ethnic Chinese in major cities like Los Angeles and San Francisco.

This rings even truer in Southeast Asia, where the Chinese diaspora is massive, particularly in Thailand, Malaysia, Indonesia, Singapore, and Myanmar. From familiar languages to food and culture that they are accustomed to, the existence of matured Chinese communities is truly attractive for Chinese in helping them adapt and settle down in a foreign country.

Only 1% of mainland Chinese speaks or understands English fluently.

Putting all these together – from enticing investment yields and comparatively strong growth prospects to well-established Chinese communities, lifestyle attractions for all kinds of buyer groups, easier visa access, as well as cost-effective and extensive travel links – it’s pretty apparent that Southeast Asia makes for a world-beating investment case to attract Chinese property investment.

Seeing as Chinese companies invested an estimated US$28.4 billion in Southeast Asia alone within the past 12 months17, we foresee individual Chinese buyers to follow suit with a wave of increased appetite for Southeast Asian real estate in the coming weeks, months, and years ahead.

Our conclusion on this compelling outlook for Southeast Asia is that it’s definitely time for agents marketing properties in the region to get moving and stake a claim on this lucrative market. Just base your pitches around the dynamics listed above, and you will be well set on your way.