With Chinese buyers being a force to reckon with in international real estate markets, how will Chinese outbound property investment fare in 2017?

We take a look at 3 key things to note on Chinese homebuying abroad amidst rising attention on China, ranging from its policies and reforms to its economic growth and currency strength. 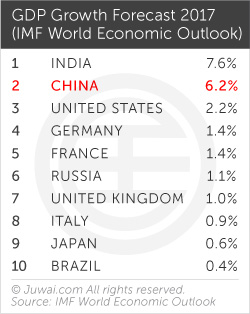 Besides that, both China’s factories and services closed out 2016 on relatively strong notes as well, which also bodes well for China’s economy in 2017.

According to Bloomberg, China’s manufacturing purchasing managers index steadied near a post-2012 high in December, inching down from 51.7 to 51.4, while the non-manufacturing PMI dipped slightly from a two-year high of 54.7 in November to 54.5.1

Those are telling indications that growth is strong enough in China for its policy makers to press for economic reforms in 2017. Thus, China’s economy is generally expected to do well in 2017, and this will create more wealth to power Chinese overseas buying.

According to a recent report released by Mercatur Institute for China Studies (MERICS) and the Rhodium Group, China’s foreign direct investment (FDI) charted a record $190 billion in 2016.4

That’s a 40% increase, which perfectly showcases the speed of China’s outbound investment expansion.4 With the Chinese yuan currently under pressure due to concerns over a devaluation, Chinese property investors are especially incentivised to buy overseas properties.

This is driven by the fact that many Chinese investors are already intending to increase their offshore holdings in the next two years (mostly to hedge the risk of a falling RMB), and the prevalent trend of real estate being the most favoured asset for Chinese.

These two factors combined make international property one of the top choices for Chinese when it comes to overseas investment and global asset allocation, and this rings true particularly true with China’s rich and wealthy.

In fact, 60% of China’s high net worth individuals (HNWIs) plan to invest in overseas property over the next three years – that means approximately 800,000 Chinese real estate buyers are looking to purchase overseas.5

How will the recent tightening of control on personal forex purchases in China potentially impact Chinese outbound real estate investment?

While China’s capital controls may scale back some Chinese billion-dollar commercial property investments abroad, it probably will not have too much impact on mainland individuals and families buying homes overseas.

After all, despite existing restrictions on exchanging more than $50,000 of currency a year (which was already in effect since 2007), almost three-quarters of home purchases in the US last year by individual Chinese buyers were all-cash, and they paid an average of $800,000, twice what other foreigners spend.3

Fact is, notwithstanding the news, there is actually no change in the amount of money Chinese are permitted to move overseas, nor what they can do with it once they do move it overseas.

The $50,000 annual quota of foreign currency officially permitted to Chinese citizens was first increased from $20,000 on 1 February 2007.6

So, in fact, we have seen the Chinese gradually loosen up restrictions over time. What's new, though, is that Chinese individuals now have to officially declare on an application form as to why they need foreign exchange, and when they will spend it.7

That aside, considering outbound tourism and studying abroad – two major drivers that motivate Chinese property investors to look abroad – are not affected, we further opine that Chinese homebuying abroad will unlikely suffer any meaningful impact from this new forex ruling change.

And while China’s international property investment may have touched all-time highs, we believe that it will continue setting records in the years to come.