In our latest Juwai Global Property Index (GPI) Report – which provides Chinese real estate buyers with research for their property investment hunt abroad – we analyse the best-performing housing markets in the first quarter of the year. 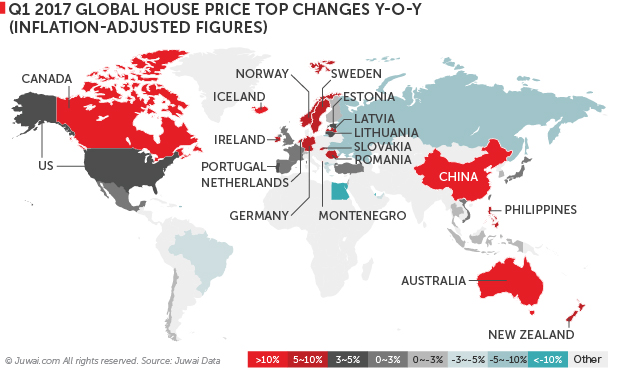 Momentum has begun to wane in global housing markets, which are beginning to lose steam in most of Asia, Latin America, and the Middle East. Nevertheless, property markets in Europe, Canada, and parts of Asia have remained robust in Q1 2017.

This quarter, Hong Kong reigned as the top performing global housing market that saw the biggest surge in home price increase, followed by most of Europe – six out of the top 10 housing markets in Q1 2017 were in Europe, and house prices grew in 17 out of its 23 European housing markets.

In North America, home prices have continued its rally in Canada in spite of repeated cooling measures being imposed in the market, while US home prices – buoyed by bullish homebuilder sentiments – maintained its slow but steady rise.

Over at the Pacific Ocean, a slew of tax increases and loan restrictions in Australia failed to significantly cool property prices in Australia, which have continued to spike. In New Zealand, reconstruction work following the earthquake have led housing prices to accelerate, even in the face of a loan restriction imposed by the government at the end of last year.

Here in Asia, housing prices in four out of ten Asian markets fell y-o-y. Asides from Hong Kong, two other markets that rose significantly this quarter were the Philippines and Taiwan. Although home prices in China continued to surge, property prices in Shanghai declined.