Chinese buyers remain the biggest spending foreign real estate buyer group of all, although they invested significantly less last year than in the year before. 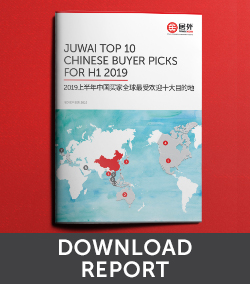 Despite the Chinese economy growing at a slower pace compared to past years, slowing to 6.3 per cent in 2019 compared to 6.9 per cent in 2017 and the Chinese government tightening the monitoring of dollar outflows since 2016 to manage its foreign exchange reserves,  Chinese appetite for overseas real estate remains tenacious albeit with more caution.

That said, Juwai.com - based on enquiries and views on its website - pulled out the Top 5 countries and their 10 most popular cities that had been attracting Chinese real estate investors from the last half of 2018 to the first half of 2019. The final list is compiled and confirmed by end June 2019.

Our report - 2019 Top 5 Chinese Buyer Picks - examine the factors behind the popularity of these countries.

Which were the top countries that attracted Chinese buyers?

The countries are deemed by Chinese buyers to stand out among investment options because they are both a hard asset and one of the best current opportunities for generating cash flow while building real, long-term wealth.

Asia, particularly Asean countries like Malaysia and Vietnam, even though they did not make it to the top 5 most-favoured countries, has also seen an increase in real-estate activity from Chinese investors as they move away from destinations in the West which are now seen as more high-risk and less welcoming. China’s Belt and Road Initiative has also made some these countries more appealing, providing Chinese buyers with a sense of confidence that their overseas investments will remain safe and stable.

In the past, the United States was the darling of Chinese buyers of overseas real estate. It ranked number one from 2015 to 2017 on Juwai’s list of most-favoured countries.  But the prolonged Sino-US trade war has dampened Chinese enthusiasm. Coupled with Beijing’s intensive pressure on capital control, net purchases of US commercial and residential real estate last year dwindled to their lowest level since 2012.

With a sluggish economy at home, Chinese investors now appear to be more cautious and are choosing more non-traditional destinations to diversify their investment portfolios outside of their homeland. But this does not mean Chinese investors have totally retreated from traditional hotspots such as the United States, Australia and Canada, but emerging markets such as Dubai and Greece are now receiving more attention and scrutiny. 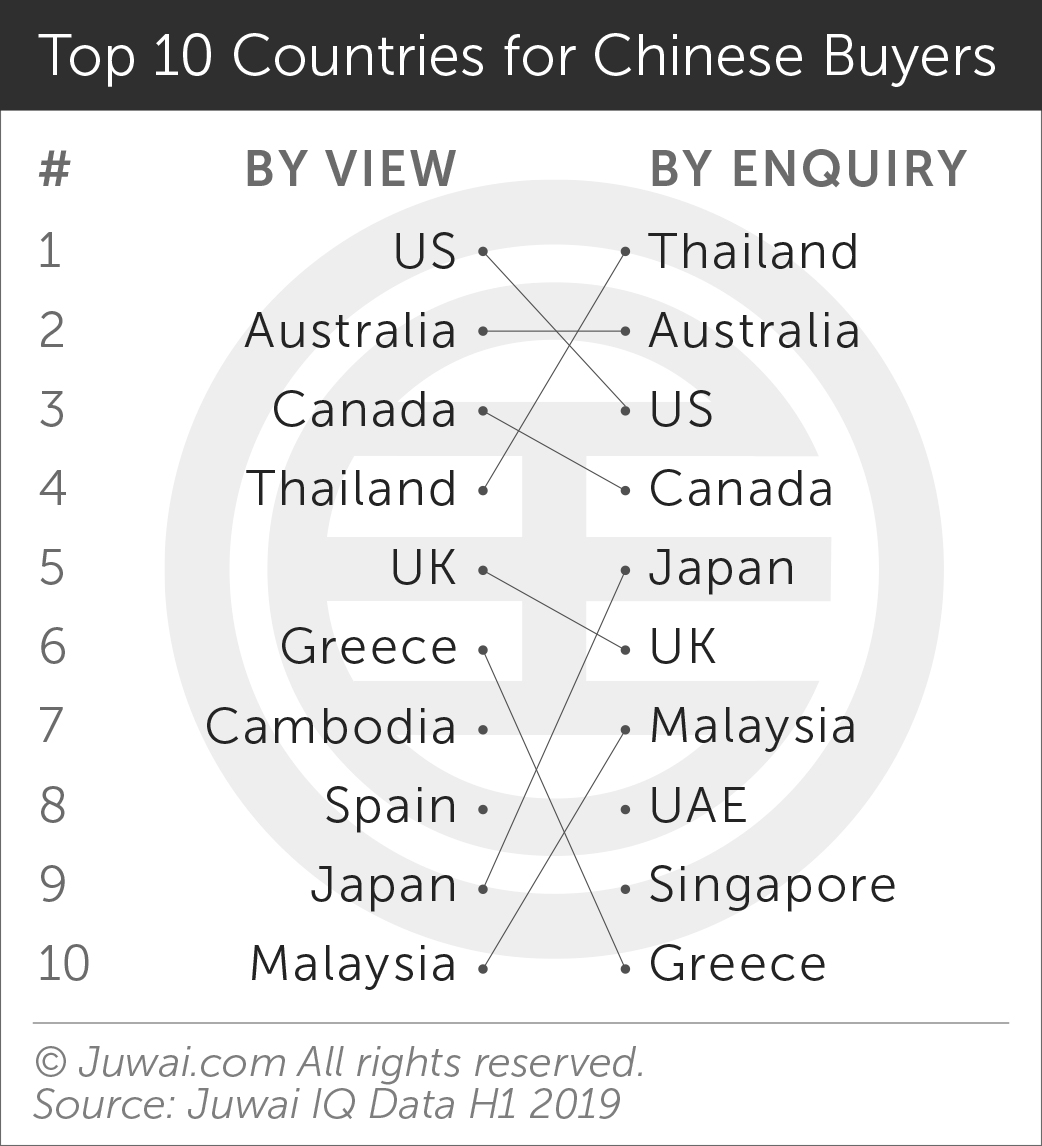 The Land of Smiles with its rich history, great food, exciting shopping, friendly people and great prices has been attracting Chinese visitors as far back as 2014 when some 4.6 million Chinese visitors started arriving at this Southeast Asian kingdom. It held the top spot In Juwai.com’s rankings last year and remained unchallenged this year.

The country’s distinct culture coupled with active development in the real estate sector were some of the factors drawing the attention of Chinese investors despite a rise of the baht's value against the renminbi.

The current wave of investment by Chinese investors into Thailand is largely targeting the rental market, with prices mainly falling in the low to mid-range bracket. It is no coincidence that the places into which Chinese property buyers are pouring their money are also the most popular with Chinese tourists.

Four cities from the Land of Smiles also made it to the Top 4 most popular cities with Chinese buyers worldwide on Juwai.com – Bangkok (#1), Pattaya (#2), Phuket (#3) and Chiang Mai (#4). Bangkok, especially, accounted for the largest share of Chinese buyer interest, showing a 73 per cent increase in enquiries. Other locations popular with Chinese buyers included tourist islands such as Ko Samui (#6), Ka Ron (#7), Kathu (#8), Amploe Thalang (#9) and Rawai (#10).

Australia has consistently occupied the number two position for most-favoured country by enquiries on Juwai.com since 2015. Higher taxes for foreigners in the two biggest markets of Sydney and Melbourne did deter some Chinese investors but a weakening Australian dollar had since boosted interest again.

Others factor driving Chinese to Australia was the increased influx of Chinese students who had turned away from US schools and universities, choosing instead to study Down Under, prompting parents to purchase homes for their children. Recent political unrest and violent protests in Hong Kong have also seen Juwai.com receiving quite a notable increase in enquiries for Australian properties — up by 50 per cent since the protests started in March this year, according to Juwai.com.

Australia is also deemed to offer a better quality of life for the Chinese. Three Australian cities - Melbourne, Sydney and Adelaide - featured in the top 10 of the 2018 Economist Intelligence Unit’s list of the world's most liveable cities.

This was very much in line with Juwai’s findings which showed that the most-enquired cities in Australia were Melbourne (#1), Brisbane (#2), Adelaide (#3) and Sydney (#4). Toorak (#5), a wealthy suburb in Melbourne and Green Hill in Adelaide also received substantial enquiries. Other cities attracting Chinese buyers included Green Hill (#6), Gold Coast (#7), Perth (#8), Melvern (#9) and Warriewood (#10).

Chinese investment in Japanese residential properties has been increasing rapidly since 2013 and its property market received a further boost for the past two years as a rising number of affluent Chinese mainlanders shift their attention to assets in Tokyo ahead of next year’s Summer Olympic Games and to Osaka which will be hosting the 2015 World Expo.

Juwai.com noted that Chinese buyers asking about Japanese properties had multiplied almost 13-fold in the first quarter of this year with enquiries rising a whopping 253 per cent. The country only ranked ninth last year.

Improved diplomatic and economic ties following the 2019 Osaka G20 summit attributed to Chinese buyers having a positive outlook on Japan’s property markets. Depreciating home prices in Japan was another incentive besides high rental yields and rent to sales ratio compared with conditions back in China.

While majority of Chinese buyers were attracted to big cities like Tokyo and Osaka, skiing destinations in Hokkaido, especially Niseko, were also catching the eye of Chinese buyers in the runup to the Beijing Winter Olympics in 2022.

Chinese also covet the higher quality of living standards in Japan. The Economist Intelligence Unit ranked Osaka fourth and Tokyo seventh in its top 10 most liveable cities in the world.

While the United States continues to be the most-viewed country by Chinese buyers, it only came up fifth in Juwai’s most -enquired list this year, tumbling from its number one ranking since 2015.  Chinese waning interest in the country was mainly due to the current political climate which has seen a rise in hostility against the Chinese.

This had undercut some of the primary drivers of Chinese demand for US properties, including buying homes for students studying there. Nevertheless, the United States still topped all other countries in real estate investment with USD13.4 billion in home purchases in March this year even though purchases of American homes were down a whopping 36 per cent from the previous year.

But instead of trophy homes and luxury apartments, Chines buyers were downsizing their acquisitions, focusing instead on lower-priced properties and student housing in suburbs such Queens and Brooklyn.