The emergence of China from the virus crisis has triggered a new high in the level of Chinese interest in UK’s residential property market.

Foreigners hoping to buy property in London will be pleased with the recent news from the British government. To help jump-start the virus-stricken economy, the government announced on 8 July a temporary tax break for primary home purchases in England and Northern Ireland, as part of a 30 billion pounds stimulus package.

This means nearly nine out of 10 people buying a home will pay no stamp duty at all.1 This coupled with the recent drop in the pound (caused by both Brexit and then Covid-19) has seen a surge in foreign buying activity, especially among Chinese property investors. Even second-home foreign buyers will benefit. They will still have to pay higher stamp duty than primary-home buyers, but the tax will be reduced.

At Juwai.com, enquiries about British homes have already seen a huge surge - up 281 per cent from May to July this year, fuelled in part by the tax holiday and also by the urgency of the tax exemption time limit. In April 2021, tax rates will revert to pre-holiday levels and foreign buyers will be hit with a new, additional two per cent surcharge. 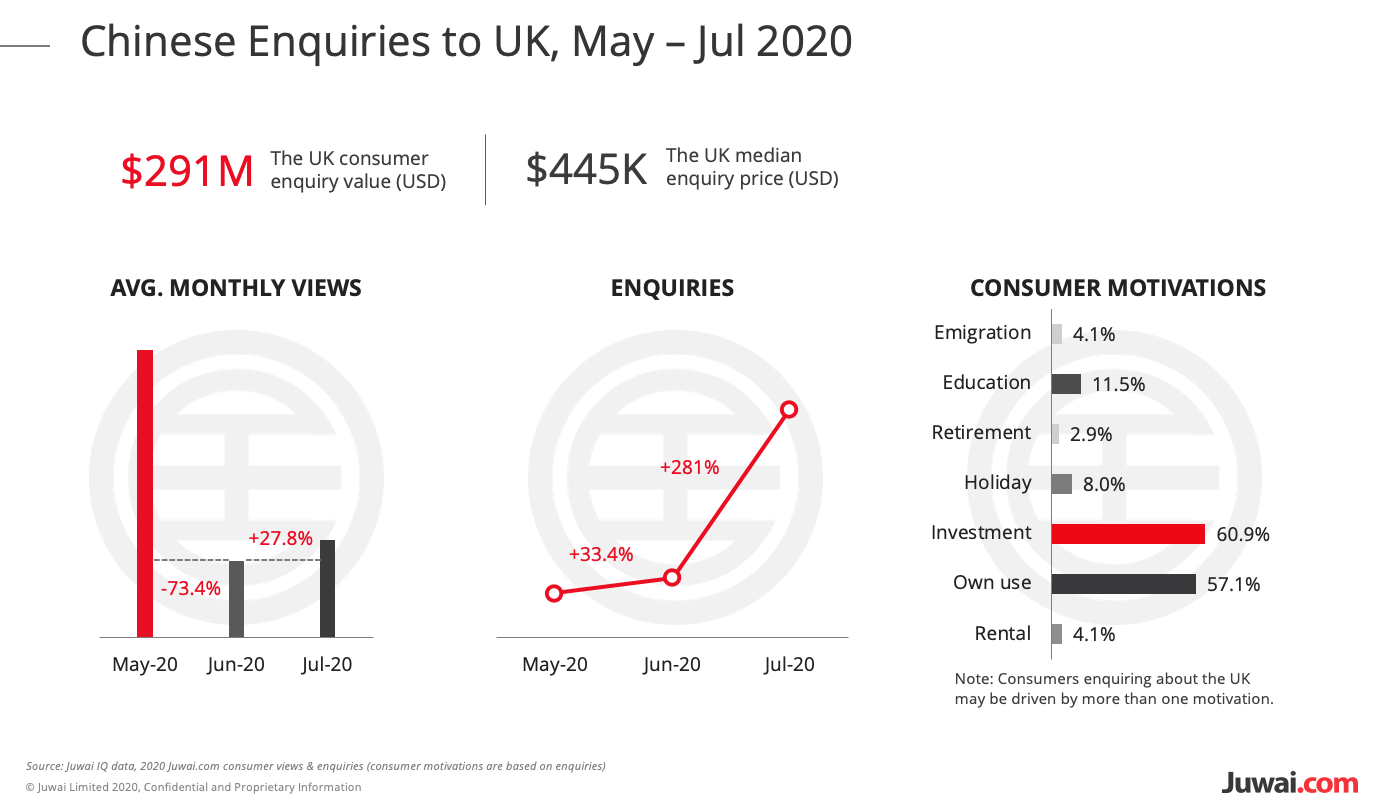 Juwai.com currently ranks the UK sixth as the most-enquired country based on enquiries it received on its website for the first half of 2020. Economic and political capital London receives the unchallenged, largest share of Chinese buyersâ€™ interest. After London, Manchester in North West England is the next popular city with Chinese buyers, followed by Liverpool, Birmingham, Cambridge, Edinburgh, Oxford, Sheffield, Leeds and Nottingham. 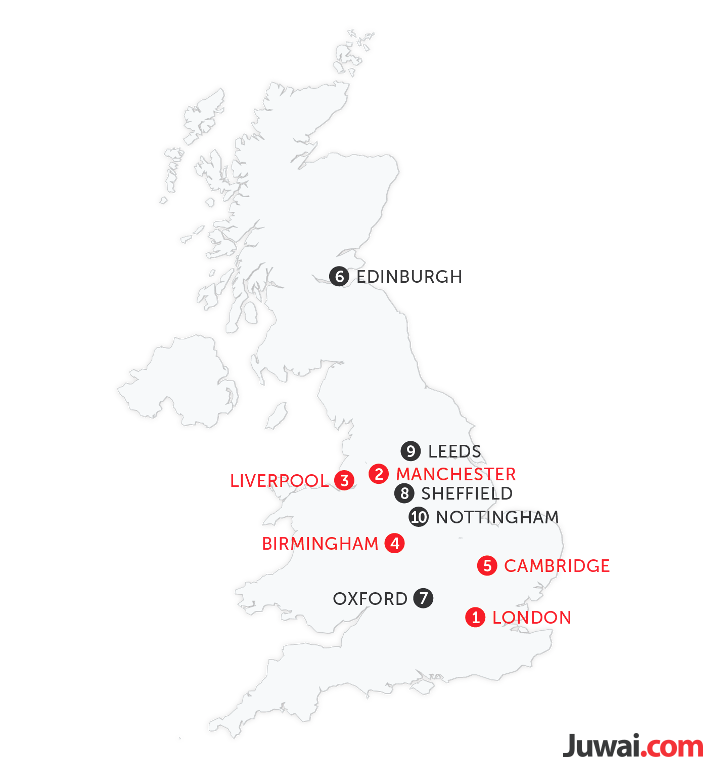 Why are Chinese buyers interested in UK and London real estate? 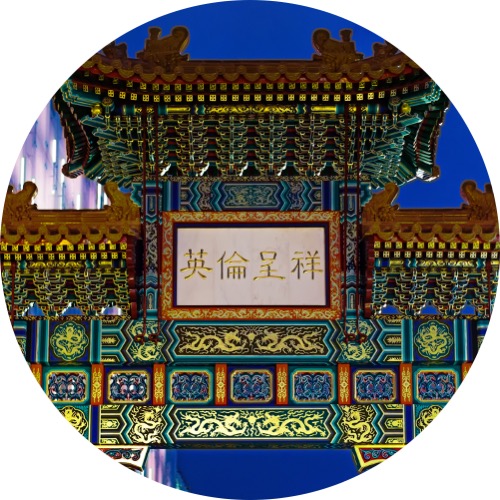 The emergence of China from the virus crisis earlier than most other countries has ignited Chinese buyers’ interest in cross-border property investments again. The UK particularly is attracting a lot of enquiries and has become an increasingly hot topic of conversation for the wealthy Chinese middle class on Chinese social media.

According to the Hurun Chinese Luxury Consumer Survey 2020, Chinese high-net-worth individuals (HNWIs) are currently putting 12.5 per cent of their wealth into overseas assets, with London ranked as the most popular investment destination.2

Experts say the continuing weakness of the British currency, low mortgage rates and stimulus measures by the British government have made the UK an increasingly attractive destination for business and study among China’s wealthy. This, in turn, is fuelling the beginnings of a potential property buying boom by Chinese buyers, especially in London, as they have a strong sense that there will be an opening to invest at prices well below the start of the pandemic. 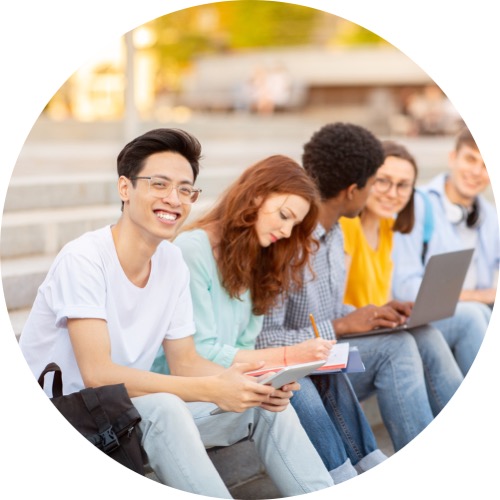 Although the coronavirus is currently having a major impact on education establishments throughout the UK, this has not deterred Chinese families from buying homes for their children studying in the country. In fact, they have become the biggest group of home purchasers in Britain. Research by one of China's largest educational firms, New Oriental Education, found that 42 per cent of Chinese students would choose the UK as the first country in which to study abroad this year, with 37 per cent of students choosing the US. It is the first time the UK has overtaken the US as the top destination for Chinese students in the survey.3 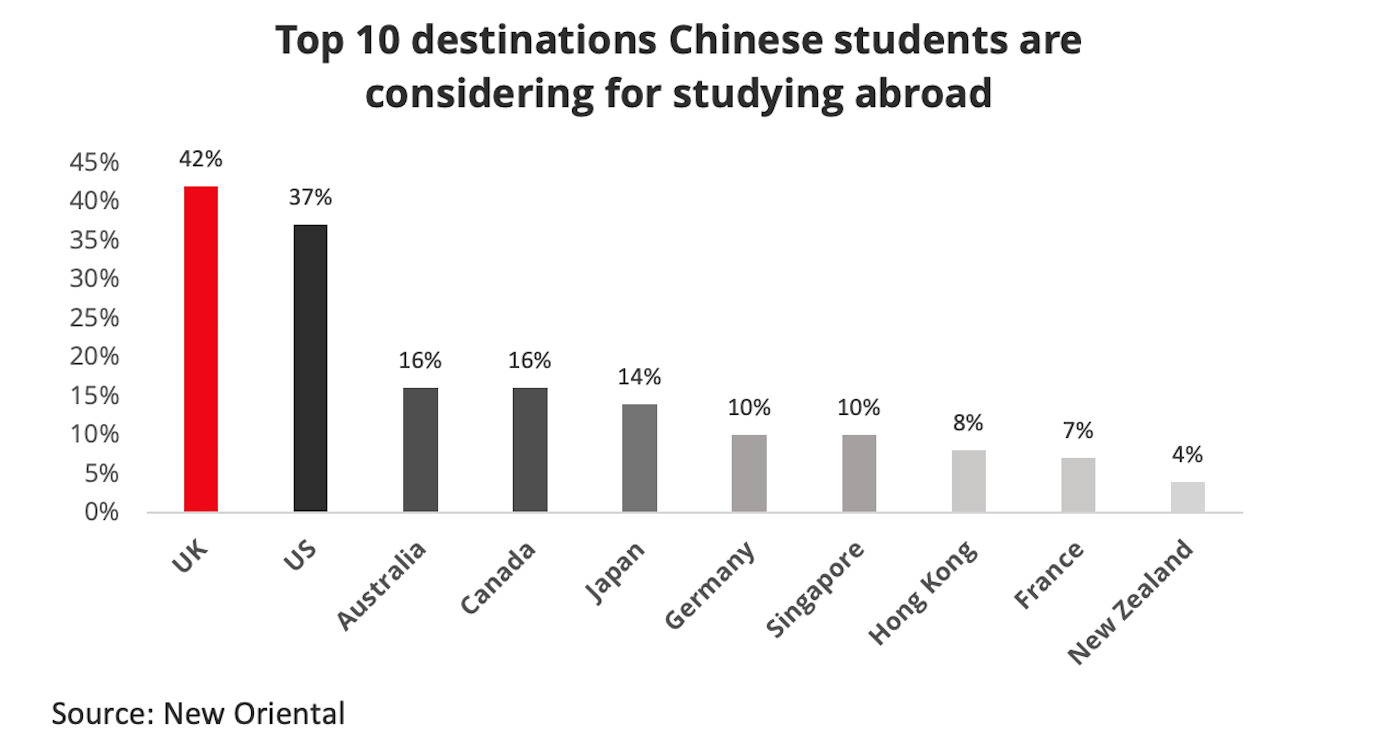 Currently, over 120,00 Chinese students are studying at UK universities, compared to 106,000 in the last academic year.4 The number of Chinese students has also grown by at least 10 per cent in recent years. This is further boosted by the recent decision of Boris Johnson’s government to extend the post-study overseas student work visa to two years.5

Although they are studying remotely at present as the UK’s lockdown measures prevent higher education institutions from opening their doors, the number of Chinese students is expected to grow rapidly for the foreseeable future – even with Covid-19 lurking in the background. This is partly due to anti-China behaviour from the Trump administration that has helped make the UK the choice for international higher education for Chinese students.

Who else is buying? 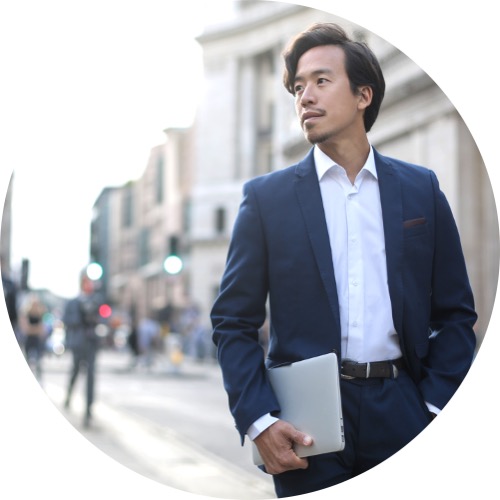 Besides parents purchasing homes to accommodate their offsprings, there are other buyer profiles from China that are flocking to the UK. Chinese millionaires, for example, are being granted Tier 1 Home Office residency visas in record numbers (Tier 1 visas require proof of £2 million in liquid assets).6

Chinese HNWIs are increasingly drawn to making strategic investments in the UK, using real estate to build diversified financial portfolios. This group seeks premium acquisitions purely as an investment, and primarily in the capital. London is now the favoured overseas destination for securing long-term financial return, with residential property on the list of popular options.

In the £1 million-plus residential property range, Chinese buyers from the mainland accounted for three per cent of UK international sales in 2013 to 13.4 per cent last year, according to sales figures from Knight Frank. In Kensington & Chelsea and Westminster alone, Chinese buyers spent approximately £500 million on residential property in 2019.7

Whilst Covid-19 has naturally taken pre-eminence in everyone’s minds over the last few months, Asian investors especially the Chinese, seem to be more optimistic about the ability of the UK economy to recover. As the pound continues to run historically low against the dollar, this is a huge draw for investors, meaning the UK offers much better value for money. Low-interest rates are also encouraging borrowers looking to invest. And London remains the go-to location for many investors.

However, the traditional priorities of choosing cities such as where best schools are located, proximity to family and friends and economic stability, new considerations - availability of healthcare, how inclusive the country is to migrants with residency visas, and how the country is reacting to the pandemic - have also emerged during this time of crisis amongst buyers. This reassessment of their buying decision may all become part of how and where foreign property buyers choose to invest in the future, say experts.