This is because Chinese believe that by powering through multiple rounds of Baijiu (ç™½é…’) – China’s fiery vodka-like liquor that translates to “white liquor” – or other spirits, they’re giving face to the host or their guest, as well as nurturing and saving face for themselves, their bosses, or their company.

Usually, this happens over the course of countless rounds of toasting and yelling the phrase, “GÄn BÄ“i” (å¹²æ¯), which literally means “drain your glass dry”. (Think of it as the Chinese version of “Cheers” or “Salut”, except they really mean “Bottoms up” instead.) 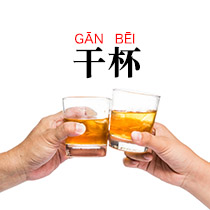 The general rule of thumb in China is that clinking glasses equates to “GÄn BÄ“i” where you have to bottoms up.

This is a “Suí Yì” (éšæ„) signal – which means, “as one pleases” or “at one’s discretion” – and indicates that you’d rather take it slow and just sip.

Interestingly enough, many Chinese also use it to gauge your “liquor courage” or “JiÇ” DÇŽn” (é…’èƒ†). In other words, it can be a subtle measure of whether you’re a real man with guts.

Do note, though, that such drinking culture is usually reserved for men, as women are usually let off the hook and not expected to drink. Nevertheless, if a woman does choose to join in, she’ll usually end up scoring double points for having such “JiÇ” DÇŽn” (é…’èƒ†).