As we head into fall, nearly all indicators point to a hot housing market in Canada for the remainder of 2020 due to pent-up demand and low inventory levels. And Chinese buyers who have stayed away during the start of  COVID-19 now seem to be taking an interest in Canada again.

When COVID-19 happened, sales started to plummet. Like most sectors of the economy, the real estate industry was affected by the lockdowns put into effect from mid-March to battle the spread of the COVID-19 pandemic. But after a very weak showing in April and May, sales climbed to reach record highs in July according to the Canadian Real Estate Association (CREA) in an announcement in August.1 CREA’s findings showed national home sales rose 26 per cent on a month-over-month basis in July. Actual (not seasonally adjusted) activity was up 30.5 per cent year-over-year while the number of newly listed properties climbed 7.6 per cent from June to July.

The largest increases were in areas that had already experienced rapid growth in the past few years such as Montreal, Ottawa and the Greater Toronto Area. Home sales in Calgary have also recovered to pre-COVID-19 levels. Similarly, home prices in Vancouver and the rest of British Columbia witnessed month-on-month increases despite restrictions on foreign buyers.2

Chinese coming back to Canada 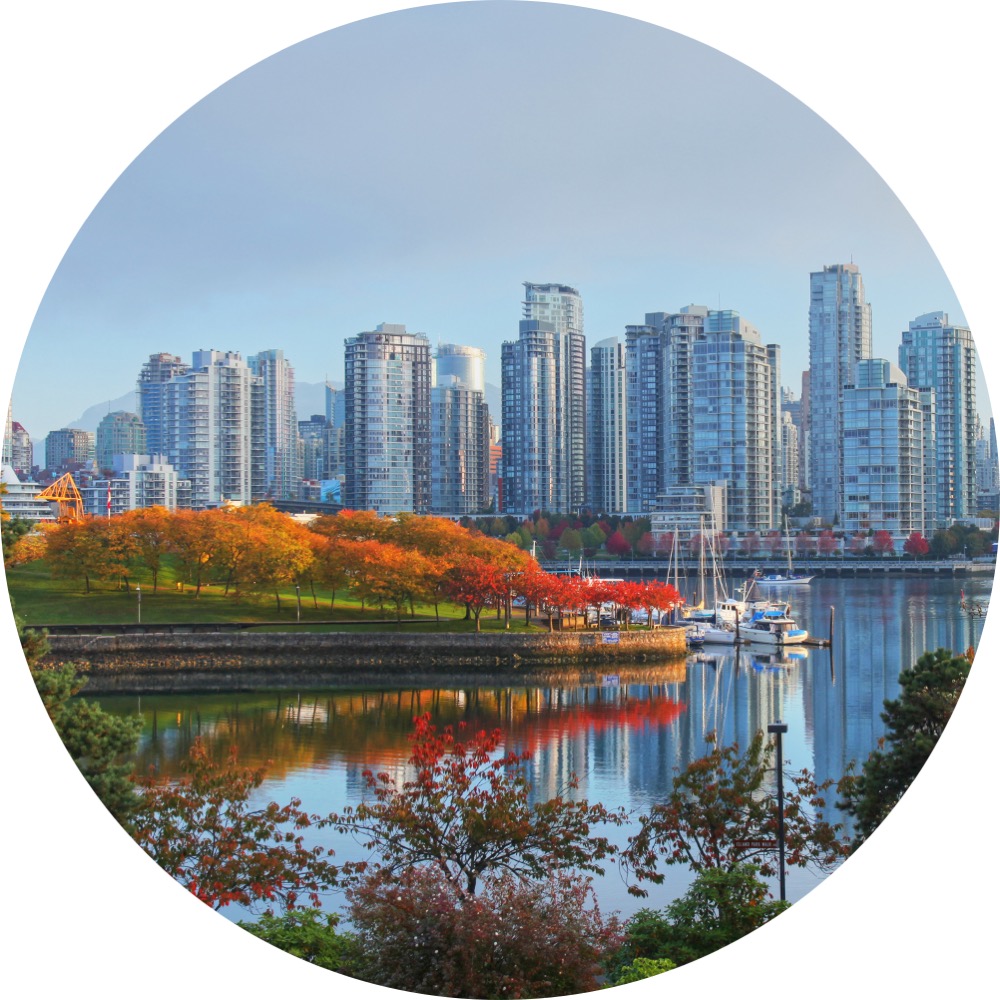 Although China-Canada diplomatic relations are at their lowest ebb in decades due to political tensions which have impacted the Metro Vancouver’s housing market in particular, this area of 2.6 million people continues to retain its traditional allure for Chinese overseas property buyers as a desirable place to live and invest in. Because of recent migration trends from China, there are now more than 500,000 Chinese people in Metro Vancouver3 who find familiarity in the city’s vibrant ethnic community.

Five years ago, China’s rich ranked Metro Vancouver as the third most desirable city in the world for “overseas property purchases”. This year’s Hurun Report4 ranked this relatively small city on the West Coast as seventh. Metro Vancouver and its real estate might be slightly down in the minds of many of China’s wealthy, but it hasn’t been totally abandoned either.

In addition, the Hurun Report says China’s high-net-worth parents pick Canada as their fourth favourite place to send their children for an education. Out of the 10 million Mainland Chinese who are transnational migrants, according to the Migration Policy Institute, half have ended up in Hong Kong and the US, while Canada has been, and remains, their third most popular choice, with Australia fourth.5 And as to why Chinese choose Canada as an immigrant destination, most say they like the country’s high quality of life, its educational facilities and its inclusive attitude toward foreigners.

Data from Juwai.com estimated that in the first quarter of 2020, Chinese nationals made 26.5 per cent fewer buyer enquiries on Canadian property compared to the same period in 2019. However, there are still active enquiries about Canada. Juwai’s data shows enquiries from Chinese buyers increased 32 per cent between Q1 2020 and Q2 2020 with most citing own use, investment and education, in that respective order,  as prime motivations.

Juwai.com noted that Canada is currently the fifth most-enquired country by Chinese buyers in the first half of this year. The top 10 cities favoured by Chinese buyers are Toronto, Vancouver, Montreal, Ottawa, Waterloo, Halifax, Calgary, Hamilton, Burnaby and Richmond.. 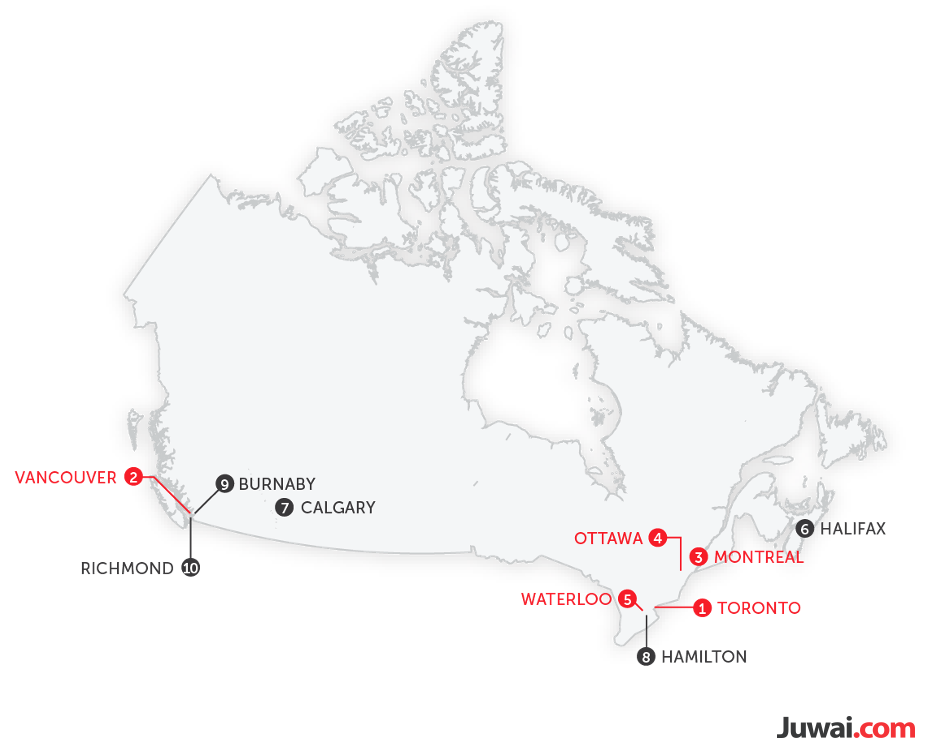 Juwai’s data also reveals that between Q1 2020 and Q2 2020, Chinese enquiries for British Columbia jumped 19.1 per cent, Montreal 13 per cent, Ontario 32.4 per cent, Quebec 45.2 per cent, Toronto 10.1 per cent and Vancouver 8.8 per cent. Alberta and Calgary outshine all other cities, with the former registering a surge of 492 per cent and the latter, 910 per cent, in enquiries.

This seems to match RE/MAX Canada’s (one of the country’s largest real estate brand) latest Canadian Housing Market Outlook (Fall 2020) report6 which reveals that Canadians are showing more interest in suburban and rural homes as the coronavirus pandemic has prompted many to reassess their living situations. According to the report, 32 per cent of Canadians no longer want to live in large urban centres, and instead would opt for rural or suburban communities. 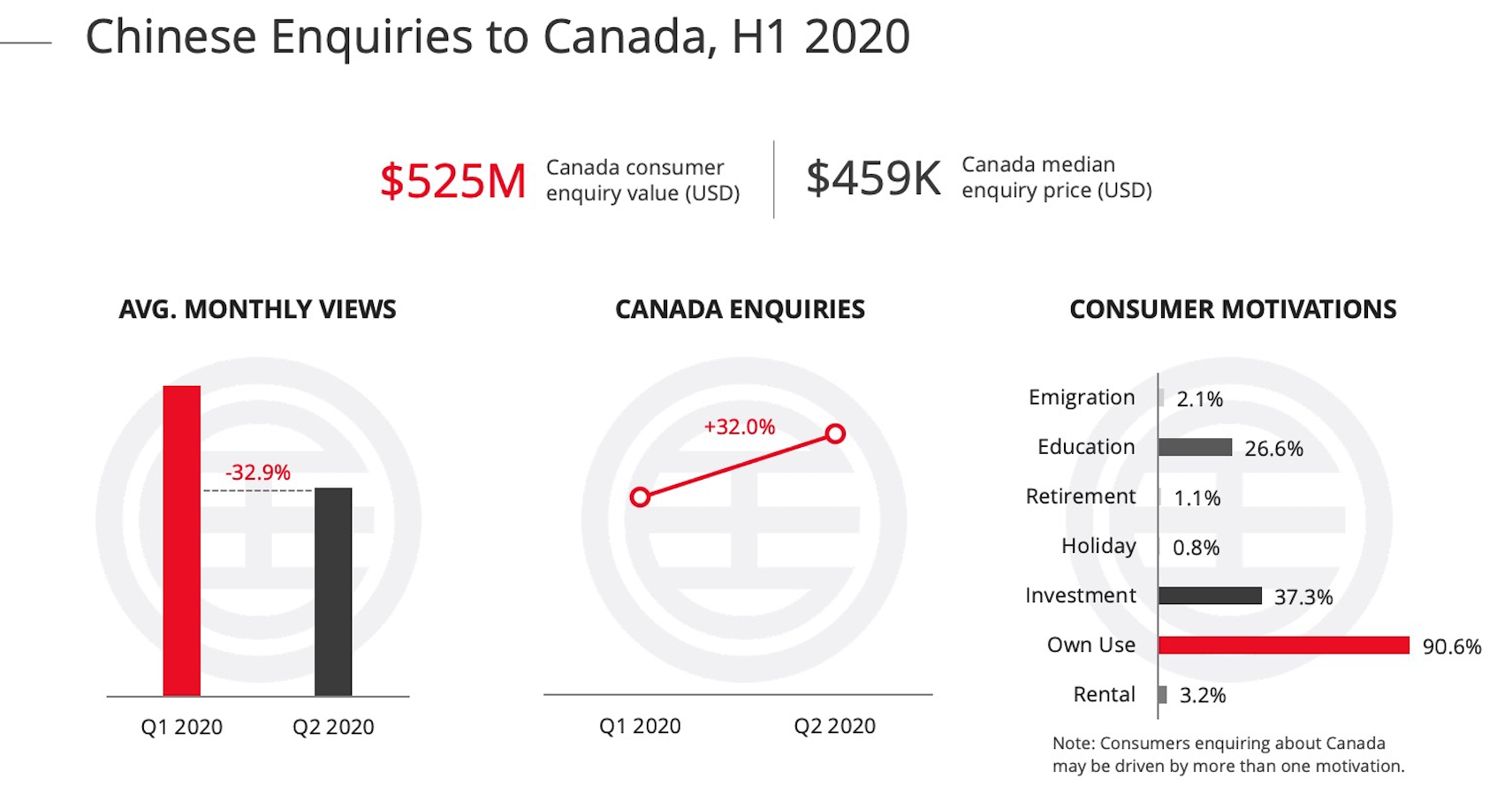 Tense relations is only a temporary setback 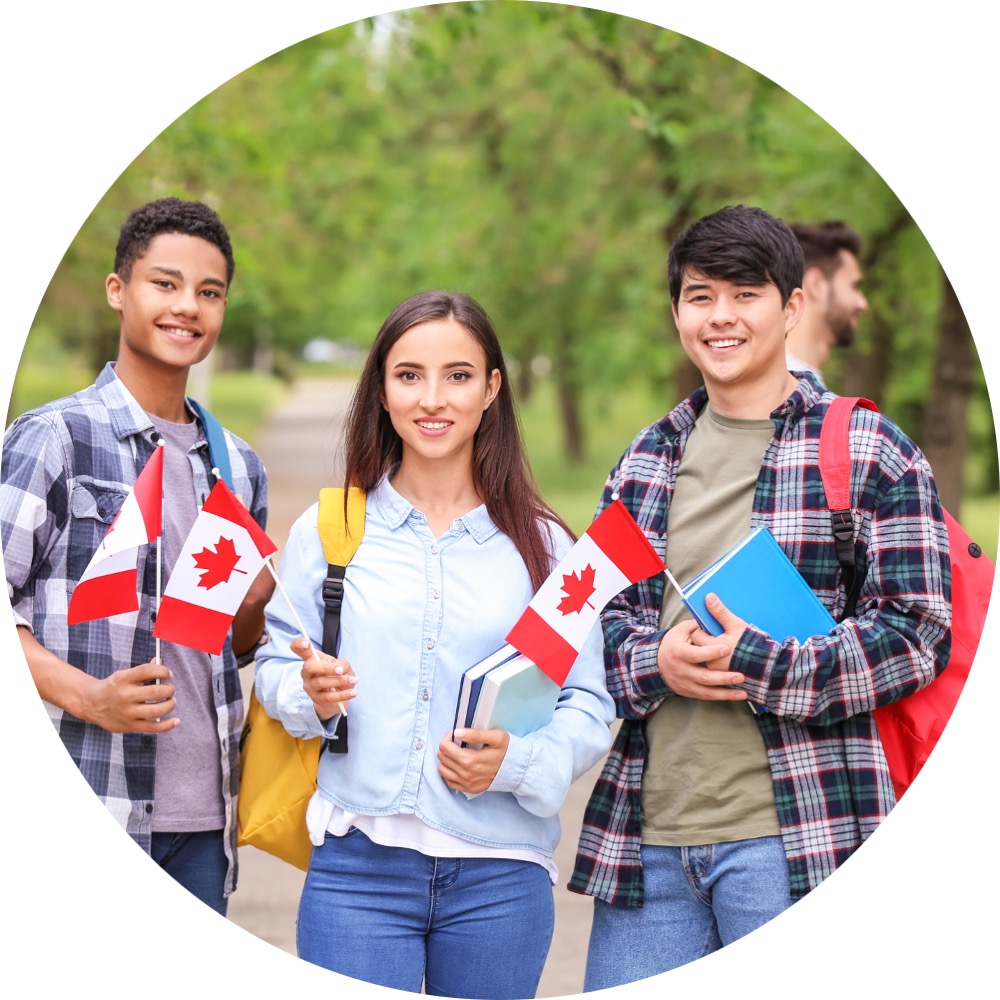 Many experts say Canada’s troubles with China are temporary and relations will return to friendlier terms soon. Economic interests will drive Canada and China to continue to work together, they say, citing the number of Chinese students currently in Canada who cover a lot of the costs for Canadian post-secondary institutions as one of the reasons.

There are currently 141,400 Chinese students in Canada,7 and it would serve the Canadian government’s interest well to not lose the support of these students. Similarly, Chinese tourists spend a lot of money, create a lot of jobs and boost local real estate sectors as they seek housing, either to rent or buy.

Chinese students spend about CAD4 billion annually in Canada. Of the more than 642,000 foreign students who studied in Canada in 2019, 22 per cent came from China. India accounts for the largest percentage - 34 per cent - of Canada’s foreign student population.8

On investment, too, Canada is open for Chinese investment in all but the most sensitive sectors. For investors who consider Canada a destination for profit as well as immigration, Canadian free-trade agreements make the country a favourable place to relocate to compared to the US which has become less friendly of late.

Looking ahead at the Canadian housing market

While COVID-19 lockdowns slowed the Canadian housing market at the start of a typically busy spring market, buying activity has bounced back by early summer in many regions, including Vancouver and Toronto, leading brokers and agents across the country to expect a rebound for the remainder of 2020 and average residential sale price to increase. They are also optimistic that the housing market will recover from the virus crisis and many agents are getting busier and working more with buyers from different major cities and countries.