4 must-knows about Golden Week: why it's huge and how to profit 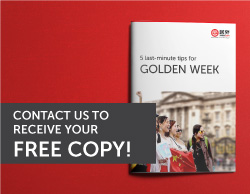 More importantly, with Q2 2016 data tracking showing a 16% y-o-y increase in outbound travelling from China, those jetting overseas from the 750 million mentioned above are expected to surpass the record of 4 million Chinese who travelled abroad during last year’s National Day Golden Week.

That’s 85% of the entire population of New Zealand, which currently stands at 4.717 million to date.2

After all, with approximately 760 million workers in China getting a week off work during Golden Week – most who would opt to travel back to their hometowns or go for a family trip – that means a mad scramble for scarce transport tickets, expensive hotels, being packed like sardines at popular tourist attractions, and massive traffic congestion3, such as the monster 50-lane traffic jam seen in Beijing after last year’s Golden Week 2015.4

It’s certainly no wonder that more and more Chinese are choosing to head overseas to beat the domestic crowds during Golden Week.

Golden Week – what’s all the fuss about?

Golden Week has been a money-spinner across the globe in recent years.

A perfect example of it would be two of last year’s biggest Golden Week winners: Japan, which raked in $830 million from 400,000 Chinese tourists in just that one week5, and the UK, which was predicted to have scored more than £600m in sales during the same period.6

And with China ranking first in the world in terms of overseas spending – Chinese tourists’ overseas spending saw a 25% y-o-y increase to hit $292 billion in 20157 – the prospect of another bumper Golden Week sales season looks very strong indeed.

Indeed, as one of two annual weeklong public holidays in China, the National Day Golden Week offers a huge opportunity for many to capitalise – especially seeing the fast-growing flow of overseas spending from China’s big spenders.

That said, where will Chinese tourists be heading to this October Golden Week?

Over 4 million Chinese outbound travellers: where are they going?

According to Hurun Report8, the following spots are some of the most preferred travel destinations for Chinese tourists, so here's where we can expect to see an influx during this National Day Golden Week:

A longtime hotspot for Chinese travellers, especially because of enticing locations such as California and New York, the US certainly is an evergreen holiday choice for Chinese travellers – arrivals from China totalled 661,988 in Q1 2016 this year, up 16.8%.10 The influx of mainland China visitors is also a major factor that has driven the $93 billion in residential real estate by Chinese buyers between 2010 and 2015.11

Close proximity, a seemingly unstoppable passion for Korean pop ‘Hallyu’ culture12, beautiful scenery, fabulous shopping, and a growing appreciation for Korean cuisine13 has made South Korea a popular choice for Chinese travellers. The first five months of 2016 saw 3.1 million arrivals from China, up 13.9% y-o-y14, and this trend is showing no signs of waning – 873,771 mainland Chinese visited Korea in August 2016 alone, a 70.2% growth that accounted for 52.5% of total visitor arrivals in that month.15 South Korea was also the #2 choice for rich Chinese during the Lunar New Year Golden Week this year.8

New Zealand’s diverse geographical allure of stunning beaches and spectacular mountains has driven a 22% increase in Chinese visitors in H1 2016 to 624,000.16 At the same time, its attractive property opportunities has also propelled a 50% jump in Chinese buyer enquiries on Juwai.com in August 2016.17

Sun, sea, and sand, as well as fantastic weather, increased flight connections, new 10-year visa policy, a promise of rugged adventures, plus abundant and pristine wildlife – think Great Barrier Reef, whale-watching, swimming with dolphins, and hugging koalas – are but some of the major drivers behind the steady growth in Chinese tourist arrivals, which reached a record 1.4 million for the 12 months ended in July 2016.18 Chinese already account as the largest group of foreign visitors to Australia19, and this is set to grow – Australia tops the travel wishlist for Chinese in the latest ‘Chinese International Travel Monitor’ survey by hotels.com.20

From Harry Potter to the British Monarchy, and from the Buckingham Palace to the luxury shopping haven that is Bicester Village21, the UK holds much fascination and great appeal to Chinese tourists. Now with the post-Brexit impact that has seen the RMB strengthening by close to 10% against the British Pound, Chinese tourists are already flocking towards the UK.22 In fact, Chinese demand for UK properties have surged post-Brexit as well, so you can bet that the UK will be on the list for Chinese this Golden Week.

Competition for Chinese wallets ratchets up: who benefits?

As Golden Week becomes a global phenomenon, more and more businesses are wising up to its potential as a highly lucrative sales season.

Retailers such as Macy’s recognises the importance of the period, and carries extensive in-store and online promotions to capitalise on the increased flow of Chinese buyers23, as does other notable retail names such as Harrods and Harvey Nichols in London.24

Retailers aside, real estate is a prime target to capitalise during Golden Week too. Last year’s Golden Week saw a Sydney-based Australian selling their Maroubra estate for AUS$10.5 million to a Chinese couple, who flew in to seal the deal.25

And with China’s new government policies attempting to cool down its real estate market, following a property boom during the past 18 months, Chinese buyers are now finding it harder than ever to purchase property in major cities across China.26 Nevertheless, despite policy tightening, Chinese property demand remains strong.

Case in point: Hangzhou. Chinese buyers in Hangzhou rushed to book 5,105 property purchases a few days ago on 18 September27, which happened to be the day before purchase restrictions clamp down on property sales to non-city residents were enforced. 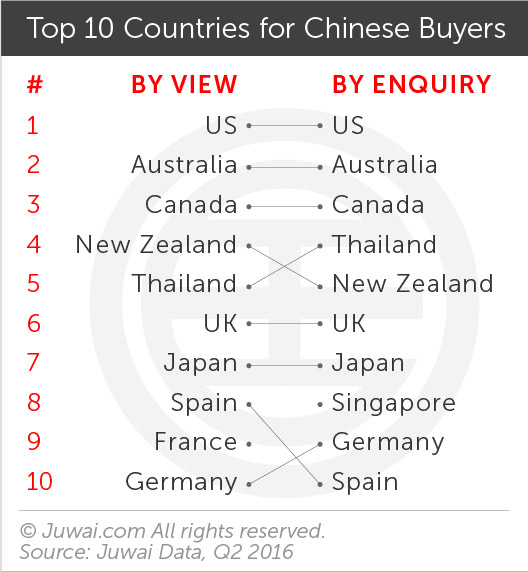 Hence, as domestic conditions get tighter and prices rise, overseas real estate is looking more and more attractive than ever for Chinese buyers.

And seeing as policy clampdowns in China are coinciding with the Golden Week period, this makes Golden Week a fantastic opportunity to tap into the demand from China’s growing base of internationally-minded property investors.

So, what we can expect is that Fly 'n Buy Chinese will be out in force and with their eyes open for great property deals in the holiday hotspots listed above, as well as in the top 10 countries on Juwai.com – five which happen to also be in the above list of preferred tourist destinations for Chinese.

Get China-ready this Golden Week: here’s how

With these factors in mind, this October’s Golden Week is an unmissable opportunity to boost your sales. With competition on the rise, get China-ready by putting these sales strategies in place to maximise your appeal to Chinese buyers:

Now that we’ve shared some tips on getting China-ready this Golden Week, we wish you best of luck with grabbing a share of the October Golden Week sales bonanza. And if you can’t build your market plan in time, don’t worry – China’s next Golden Week opportunity is happening in January 2017, which is during Chinese New Year.