6 reasons Vietnam is set for a Chinese buyer boom

Chinese enquiries for Vietnam properties grew 442% y-o-y on Juwai.com between January and May 2017.1

According to the amended Law on Residential Housing (LRH)2, any foreigner who possesses a Vietnam visa and is allowed entry into Vietnam will be permitted to purchase Vietnam residential property – including apartments, villas and townhouses – with a 50-year tenure.2

More impressively, the amended LRH also offers a chance for international buyers married to Vietnamese citizens to obtain freehold tenure of Vietnam properties3, while other foreign real estate investors are presented with a possible renewal of their house ownership certificate upon expiration after 50 years.2

This is a major step-up from before, when foreigners could only consider buying Vietnam property only after working there for a minimum of one year, and only if they met certain criteria. Even then, international investors were only allowed to buy one condominium.2

As such, this real estate rule change opens up a wealth of opportunities in Vietnam to Chinese investors, especially seeing as the Chinese government has introduced its strictest purchase controls on the domestic market yet.

Cooling measures including higher downpayments, increased interest rates, and curbs on multi-home ownership have dampened the Chinese real estate market, with sales in Beijing alone dropping 38% y-o-y in May 2017.4

Vietnam and China already share a common border that not only spans 1,350km, but also sees seven Vietnamese provinces border China, making Vietnam one of the nearest Southeast Asian countries to China, alongside Laos and Myanmar.

Although Vietnam already has numerous rail and road links with neighbouring China, it’s getting even more convenient for Chinese to visit now, thanks to a raft of new flight links connecting Chinese cities to Vietnam’s vast array of hotspots.

Most recently, Vietnam Airlines launched direct flights between Nha Trang and Changzhou on 28 June 2017, with two more upcoming routes between Nanning and Ho Chi Minh City, as well as Da Nang and Lanzhou, to begin in early July 2017.7

Even the cruise ship industry wants a slice of the China pie â€“ a brand-new luxury cruise liner will soon connect Guangxi to Da Nang and Nha Trang come August 2017.8

Vietnam has been making all the right moves in boosting its tourism appeal, and now it’s reaping the fruits of success – Vietnam has just been named by the United Nations World Tourism organisation as one of the fastest-growing travel destinations in the world.9

Vietnam ranked #7 on the list, and was the only Southeast Asian country to make it into the top 10.9

And yet, Vietnam is set to welcome even more Chinese travellers this year, thanks to its approval of online e-visas for short-term Chinese visitors, as well as its relaxed visa rulings to allow Chinese travelling by car and in groups a 3-day visa-free entry into the northern province of Quang Ninh.11

These two moves were both launched on 1 January 2017, and have been more than successful in drawing more visitor arrivals from China – Chinese arrivals in Vietnam were up 63.5% in Q1 2017.10

Buoyed by these relaxed visa policies, plus the new transport links mentioned above, Vietnam is expecting a further 48.1% y-o-y increase from last year’s 2.7 million Chinese visitors to hit 4 million by the end of 2017.12

With an average economic growth of 5.9%, Vietnam’s fast-growing economy has generally outperformed the Southeast Asia’s 5.0% and Asia-Pacific region’s 5.5% over the past five years.13

More importantly, this strong performance is expected to continue, with 6.3% growth forecast between 2017 and 2020. 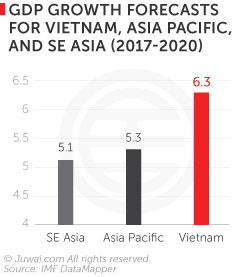 Faced with such stable economic conditions, Chinese foreign direct investment (FDI) into Vietnam has spiked, with Chinese investing $823.6 million into Vietnam to account for 10.86% of its total registered FDI in Q1 2017 alone.16

And while China is currently only the third-largest foreign direct investor in Vietnam behind South Korea ($3.74 billion) and Singapore ($910.8 million)16, this could possibly change in the future. 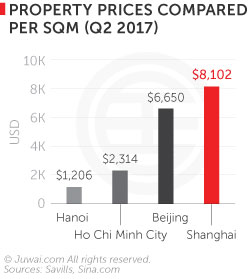 Aside from Vietnam’s strong economic prospects, real estate assets are not only very attractively priced, but also offer robust returns when compared to China.

Clearly, Vietnam properties offer value for money and an enticing prospect, especially since JLL is expecting prices to grow in 2017.17

Vietnam’s strong rental returns is the further icing on the cake – return on rental properties in major Vietnamese cities are roughly 2.5% higher than those in Bangkok, Singapore, and Hong Kong.18 Need we say more?

The Vietnam government recently opened its education sector to foreign investors19, and that means a boom in international-standard schools and universities is coming.

Where are Chinese buyers eyeing in Vietnam? According to Q1 2017 Juwai Data, it’s Ho Chi Minh, Da Nang, and Nha Trang that are leading the way in terms of popularity with investors from China.

Formerly known as Saigon, Vietnam’s business centre and the mainstay of the economy that accounts for around 20.2% of GDP22, Ho Chi Minh city is a highly attractive location for Chinese buyers.

Centrally located areas like Phuong and An Khanh, which are close to the river and right in the heart of Ho Chi Minh City’s hustle and bustle, are Chinese buyers most preferred locations. With property prices close to a quarter of Shanghai, it’s easy to see why.

The third-largest city in Vietnam thanks to its busy port, Da Nang is home to Vietnam’s most attractive beachfront properties, as well as some the most modern infrastructure in the country, such as the recently-completed Da Nang International Airport.24

Set within close proximity to several UNESCO heritage sites, such as Hoi An, Da Nang offers average CBD real estate prices of around $875 per sqm25,  and its resort residences, world-class leisure and heritage attractions bring a unique and compelling appeal to Chinese investors, particularly those seeking lifestyle property or investment yields.

Da Nang’s local government also offers investment-friendly policies that has earned it the title of the best business-friendly environment out of Vietnam’s 63 provinces.26

The population of this popular coastal tourist location is expected to double by 2025, and one look at Nha Trang’s beautiful bay area is enough to see why.

Nha Trang is Vietnam’s most popular tourist hotspot, and it’s seeing huge interest from Chinese visitors, with an estimated 510,000 Chinese visiting in 201610, and the prospect of having a holiday home is driving strong growth in Nha Trang-related searches.

5 tips to leverage the Chinese demand for Vietnam real estate

With this surge in popularity for Vietnam real estate amongst Chinese buyers, now is an ideal time to step up your game to attract clients from China if you have listings in Vietnam. We sign off with five principles to help you boost your Chinese marketing plan: